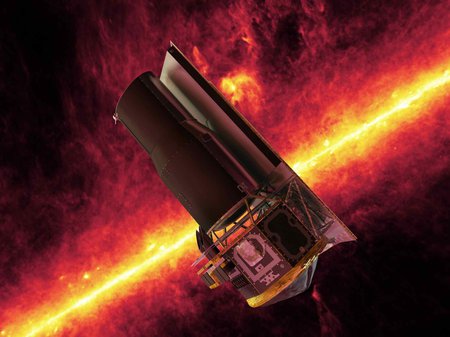 Launched into a solar orbit on August 25, 2003, Spitzer was the final of NASA's four Great Observatories to reach space. The space telescope has illuminated some of the oldest galaxies in the universe, revealed a new ring around Saturn, and peered through shrouds of dust to study newborn stars and black holes. Spitzer assisted in the discovery of planets beyond our solar system, including the detection of seven Earth-size planets orbiting the star TRAPPIST-1, among other accomplishments.

"Spitzer is farther away from Earth than we ever thought it would be while still operating," said Sean Carey, manager of the Spitzer Science Center at Caltech in Pasadena, California. "This has posed some real challenges to the engineering team, and they've been extremely creative and resourceful to keep Spitzer operating far beyond its expected lifetime."

In celebration of Spitzer's 15 years in space, NASA has released two new multimedia products: The NASA Selfies app for iOS and Android, and the Exoplanet Excursions VR Experience for Oculus and Vive, as well as a 360-video version for smartphones.