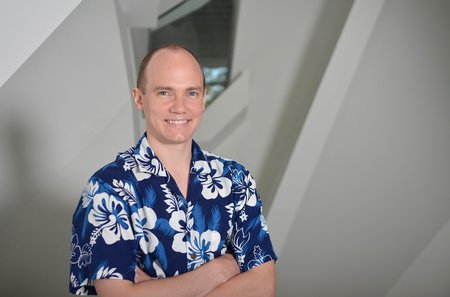 Caltech's Evan Kirby, assistant professor of astronomy, has won the Newton Lacy Pierce Prize in Astronomy, an annual award presented by the American Astronomical Society, or AAS, to astronomers 35 years old or younger.

Kirby specializes in the study of dwarf galaxies—tiny galaxies that orbit larger galaxies like our Milky Way. He measures the abundances of different elements in these galaxies, offering insight into their evolution as well as the evolution of other stars and galaxies. Dwarf galaxies are near enough to us to be studied in detail and simple enough to make straightforward interpretations about the evolution of their elements.

In 2013, Kirby discovered that the dwarf galaxy called Segue 2 has the least amount of dark matter known in any galaxy. Dark matter is a mysterious substance that makes up more than one-quarter of our universe. The Segue 2 finding is helping astronomers piece together how dark matter and galaxies evolved together in our universe.

Kirby also is involved in designing the galactic archaeology survey for the Prime Focus Spectrograph on the Subaru Telescope in Hawaii. Furthermore, he is planning a stellar isotope survey at Caltech, which will be one of the most detailed surveys ever of galactic chemical evolution.

Kirby earned his bachelor's degree in physics from Stanford University in 2004 and his PhD in astronomy and astrophysics from UC Santa Cruz in 2009.

The Pierce Prize citation says, "The AAS awards Dr. Evan Kirby the Newton Lacy Pierce Prize for his work on the stellar chemical abundances in dwarf galaxies. Dr. Kirby is recognized for his pioneering work in isolating metallicity variations in late-type stars through medium resolution spectroscopy, and applying the observational and stellar synthesis techniques to the stellar populations within faint and distant dwarf galaxies. His work has provided detailed understanding of the alpha-to-iron abundances in local group galaxies, and shown a universality in the mass-metallicity relation of dwarf irregular and dwarf spheroidal galaxies."

The Pierce Prize is awarded annually for outstanding achievement over the past five years in observational astronomical research based on measurements of radiation from astronomical objects. It is given to an astronomer who has not attained 36 years of age in the year designated for the award.