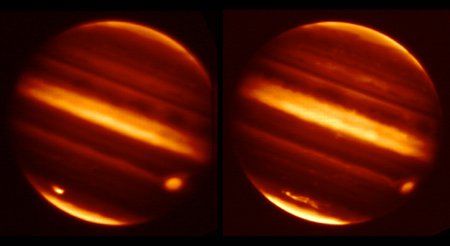 A hurtling asteroid about the size of the Titanic caused the scar that appeared in Jupiter's atmosphere on July 19, 2009. Data from three infrared telescopes enabled scientists to observe the warm atmospheric temperatures and unique chemical conditions associated with the impact debris. By piecing together signatures of the gases and dark debris produced by the impact shockwaves, an international team of scientists was able to deduce that the object was more likely a rocky asteroid than an icy comet.