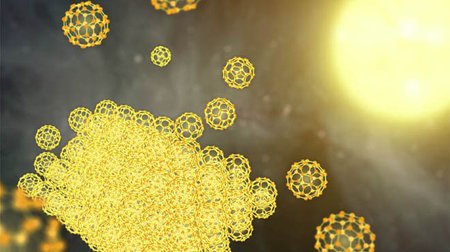 Buckyballs—those odd molecules made up of 60 carbon atoms arranged like hollow spheres—have been found, for the first time, in their solid form in space. Astronomers working with NASA's Spitzer Space Telescope discovered particles made up of the stacked soccer ball–like molecules around a pair of stars 6,500 light-years from Earth.

Formally called buckminsterfullerene, buckyballs are named after their resemblance to the geodesic domes that the late architect Buckminster Fuller designed. Spitzer has previously detected buckyballs in space in the form of gas. The new discovery of the particles suggests that some stellar environments must harbor large quantities of these molecules.