The latest collection covers Albert Einstein's thoughts on quantum theories emerging in the late 1920s, his unwitting collaboration with an academic fraud, and letters to a woman who may have been his first love. 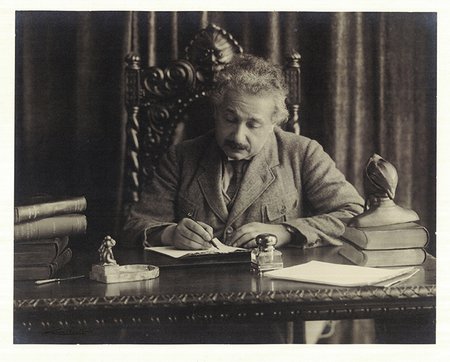 The Collected Papers of Albert Einstein: Volume 15: The Berlin Years: Writings & Correspondence, June 1925–May 1927, Documentary Edition focuses on a period in Einstein's life when he wrestled with new and competing models of quantum mechanics, fell victim to an academic fraudster, and continued his work as an ambassador for post-WWI European peace efforts. The book will be available April 6 through Princeton University Press.

Diana Kormos-Buchwald, Robert M. Abbey Professor of History at Caltech and director of the Einstein Papers Project, says the latest volume describes the two years as an "extraordinarily busy, engaged, and, at times, turbulent" period in Einstein's life. Despite having won the Nobel Prize in Physics in 1921 for work he produced nearly two decades earlier, Einstein remained busy at the front lines of scientific research and academia.

"We find him working daily on the latest developments in modern physics; engaging with his colleagues and perfect strangers in considerate discussions; being a referee for scientific journals; applying for grants; administering funds and institutions; grappling with personnel issues; and being bored in meetings," Kormos-Buchwald says. For this volume, the international team of collaborators at the Einstein Papers Project collected, transcribed, translated, and researched around 100 writings by Einstein and about 1,400 letters.

The mid to late 1920s were a dynamic time in the world of physics. A new theory of quantum mechanics, which describes the properties and behavior of atomic and subatomic particles, was beginning to emerge. One model, matrix mechanics, was championed by German physicists Werner Heisenberg, Max Born, and Pascual Jordan. Meanwhile, Austrian physicist Erwin Schrödinger was developing his own model of wave mechanics. Einstein's papers show him favoring the latter, though the models were later shown to be equivalent.

Einstein also found himself in the company of Emil Rupp, a well-respected German physicist whose experiments seemed to support Einstein's hypothesis that excited atoms emitted light over a short amount of time rather than instantly. The two men collaborated, but Rupp was eventually revealed to be a fraud who had fabricated much of his work and findings.

While the new volume focuses on the years 1925–27, it also includes newly discovered letters from the late 1890s between Einstein and Marie Winteler, the 18-year-old daughter of a family he lived with while he attended school in Switzerland. Winteler is described by the editors as perhaps his "first romantic love."

"We are always asked, 'Is there anything we don't know about Einstein after all these years?' And as editors of the Einstein Papers Project, we always reply, 'Yes, there is a lot that we are learning and discovering,'" Kormos-Buchwald says.

The first volume of The Collected Papers was published in 1987. When completed, they will comprise nearly 30 volumes and will contain more than 14,000 documents. The project is located at Caltech, and supported by Caltech, the Hebrew University of Jerusalem and Princeton University Press.