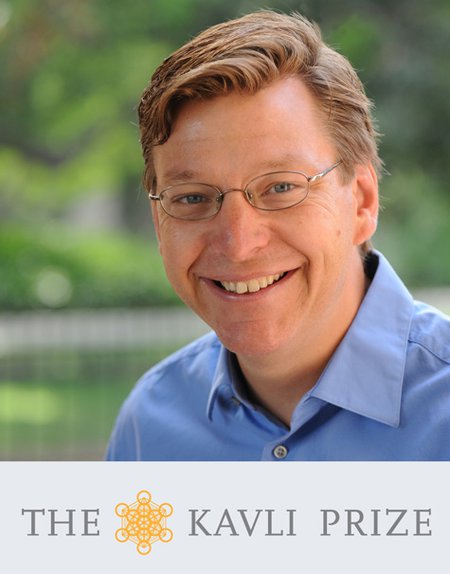 PASADENA, Calif.—Mike Brown, the Richard and Barbara Rosenberg Professor and professor of planetary astronomy at the California Institute of Technology (Caltech), has been named a co-winner of the 2012 Kavli Prize in Astrophysics for his efforts to understand the outer solar system—work that led to the demotion of Pluto.

Brown shares the award with David Jewitt (MS '80, PhD '83) of UCLA and Jane Luu of MIT's Lincoln Laboratory; in 1992, Jewitt and Luu discovered the first object in the Kuiper belt, a collection of more than a thousand objects beyond the orbit of Neptune. Brown, who joined Caltech's faculty in 1997, has since become a leader in the search for planet-sized objects in the Kuiper belt. According to the prize citation, the three received the prize "for discovering and characterizing the Kuiper belt and its largest members, work that led to a major advance in the understanding of the history of our planetary system."

Brown's most well-known discovery came in 2005, when he found a Kuiper-belt object, later named Eris, that is about the same size as Pluto but 27 percent more massive. That finding caused astronomers to rethink the definition of a planet, resulting in the reclassification of Pluto as a dwarf planet.

"Mike spent years acquiring a massive number of images and learning how to process them to accurately detect objects that subtly shift in the sky over successive days—without knowing whether there was anything interesting to be discovered," explains Kenneth Farley, the W.M. Keck Foundation Professor of Geochemistry and chair of the Division of Geological and Planetary Sciences. "But that dedication was rewarded by the discovery of several fascinating Kuiper-belt objects, and just as important as their discovery was Mike's effort in understanding them—where they came from, how they formed, what they are made of, and what they tell us about our solar system. It is wonderful to see Mike recognized for these contributions."

"This distinguished prize is further acknowledgment of Mike's extraordinary accomplishments and pioneering research that has literally reshaped our understanding of the solar system," adds Caltech president Jean-Lou Chameau. "He is truly a 'renaissance scientist' who approaches teaching and scientific discovery with passion and charisma. We are proud of Mike and are privileged to have him on the Caltech faculty."

"It's humbling to be included alongside previous Kavli Prize winners, from the people whose incredible designs for telescopes enable all of us to make these discoveries to the very pioneers of astrophysics," says Brown. "And it's an amazing reminder that some of the mysteries of the universe are right here in our own cosmic backyard."

The Kavli Prize, which includes a scroll, a gold medal, and $1 million, recognizes scientists in astrophysics, nanoscience, and neuroscience, and has been awarded every other year since 2008. King Harald of Norway will present the prizes to the winners at a ceremony in Oslo on September 4. Caltech's Maarten Schmidt, the Francis L. Moseley Professor of Astronomy, Emeritus, won the astrophysics prize in 2008. Past winners who are Caltech alumni include Jerry Nelson (BS '65), Roger Angel (MS '66), and Richard Scheller (PhD '80).

The Kavli Prizes were initiated by and named after Fred Kavli, founder and chairman of the Kavli Foundation, which is dedicated to advancing science for the benefit of humanity, promoting public understanding of scientific research, and supporting scientists and their work.