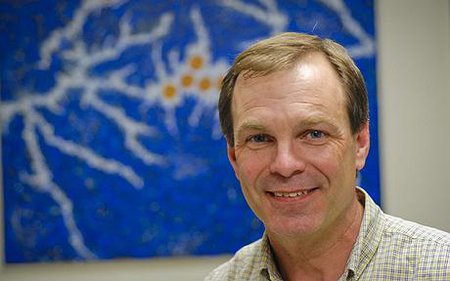 PASADENA, Calif.--Andrew Lange, the Marvin L. Goldberger Professor of Physics and chair of the Division of Physics, Mathematics and Astronomy at the California Institute of Technology (Caltech), has been awarded the 2009 Dan David Prize along with Paolo De Bernardis of the University La Sapienza in Rome and Paul Richards of the University of California, Berkeley. Lange and De Bernardis have been recognized for leading the BOOMERanG experiment, which provided the first undisputed evidence of the universe's flat geometry. Richards's MAXIMA experiment confirmed the result soon after. The experiments made the first resolved images of the cosmic microwave background radiation. Lange and colleagues were able to deduce the universe's geometry from the angular sizes of the intricate structures in the images, using theoretical tools developed by Marc Kamionkowski, the Robinson Professor of Theoretical Physics and Astrophysics at Caltech, and his colleagues.

The Dan David Prize is a joint international enterprise, endowed by the Dan David Foundation and headquartered at Tel Aviv University. The prize is awarded annually for achievements having an outstanding scientific, technological, cultural, or social impact on our world. Each year fields are chosen within three time dimensions: Past, Present, and Future. Lange, De Bernardis, and Richards are sharing the $1 million prize in the Past dimension for Astrophysics--History of the Universe. "The work recognized by this prize was a team effort," says Lange. "Many other people deserve recognition, especially Jamie Bock and his group at the Jet Propulsion Laboratory (JPL) microdevices lab, which developed the detectors that enabled both BOOMERanG and MAXIMA." Additional analysis of BOOMERanG and MAXIMA's data implied that ordinary matter constitutes a small fraction of the cosmic mass density (5 percent at the present time). These results have been subsequently confirmed and carry important implications for fundamental physics. The nature of most of the cosmic matter (known as Dark Matter) is actively being explored, and the flat geometry of the universe is believed to have originated from an early epoch of the universe's inflation, during which space curvature was erased by a prolonged period of vast expansion.

"The measurement of the large-scale geometry of the universe by Lange and his colleagues is one of the great achievements of all time in cosmology; it richly deserves this Dan David Prize," said Kip Thorne, the Richard P. Feynman Professor of Theoretical Physics at Caltech. "We at Caltech should be very proud to be associated with Andrew Lange, his BOOMERanG team, and their achievements."

Lange and his Caltech students worked closely with Bock and his group at JPL in developing the spiderweb bolometers that made possible BOOMERanG and MAXIMA, as well as several other major cosmological and astronomical projects and instruments.

"This technology is about to be launched into orbit on the Planck satellite later this spring," says Lange. "We still have much more to learn from the microwave background."

The other 2009 Dan David laureates are former British prime minister Tony Blair for Present Leadership, and Robert Gallo, director of the Institute of Human Virology at the University of Maryland School of Medicine, for Future Global Public Health. Dan David laureates donate 10 percent of their prize money to graduate students in their respective fields, thereby contributing to the community and fostering a new generation of scholars. For more information, visit http://www.dandavidprize.org/.