Caltech Celebrates the Class of 2019 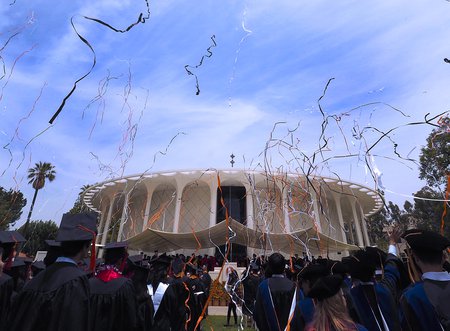 Caltech celebrated its 125th Commencement on Friday, June 14, 2019, as 586 students—240 earning bachelor's degrees, 139 earning master's degrees, and 207 earning PhD degrees—crossed the stage on Beckman Mall to receive their degrees in front of a joyful crowd of faculty, dignitaries, friends, and family.

On a mild spring morning, the campus was filled with cheer and ceremony as speeches were delivered and awards bestowed. A highlight of the day was the return to campus of astrophysicist and Caltech alumna France Córdova (PhD '79), now director of the National Science Foundation (NSF), to deliver the commencement speech.

"It's great to be back home!" said Córdova. "I have special memories of my time here as a student. It was one of the most important times of my life. … It was an environment in which to grow, learn from imaginative individuals—including our fellow students—work long hours and play long hours, learn to do things on our own and make our own mistakes, and relish it all."

As the processional began, students filed in to Beckman Mall wearing academic regalia informed by tradition but also individually customized. In addition to their simple black gown and black mortarboard, Caltech undergraduates may choose to wear a colored stole to the ceremony. Orange stoles denote Caltech pride, while other colors represent the undergraduate's house affiliation.

First to step to the podium was David Lee (PhD '74), chair of the Caltech Board of Trustees. Lee welcomed those in attendance and shared such recent Institute accomplishments as the opening of the Bechtel Residence, Caltech's first new undergraduate housing facility in more than two decades, and of the Hameetman Center, the Institute's new community gathering spot. Lee also mentioned the renovated Ronald and Maxine Linde Hall of Mathematics and Physics as well as the Chen Neuroscience Research Building, which is taking shape along Del Mar Boulevard. 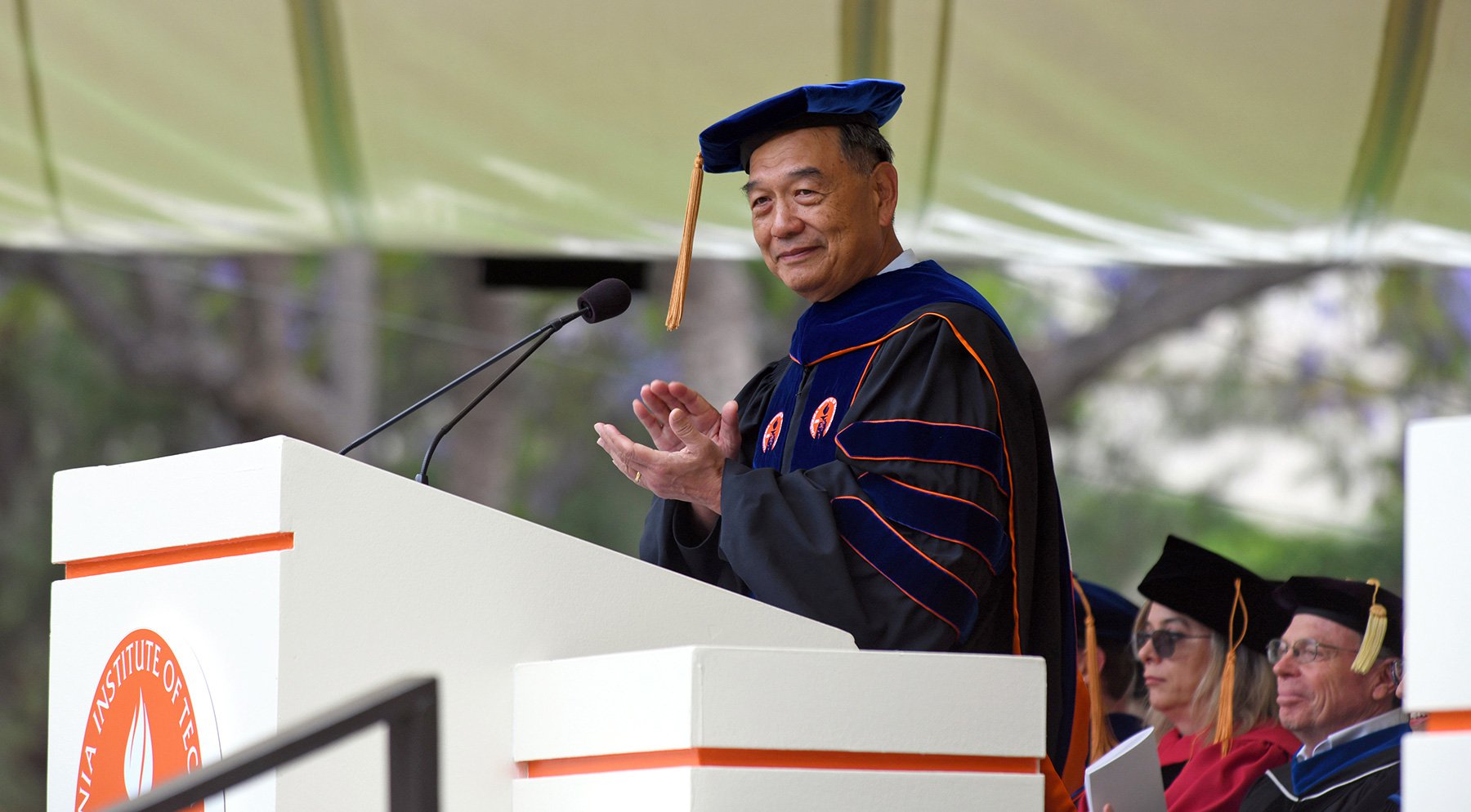 With an "extraordinary new commitment" from trustee Richard Merkin, Lee noted, Caltech recently launched the Merkin Institute for Translational Research, which will, he said, "equip researchers with tools and resources to transform their scientific breakthroughs into medical innovations that enable longer, healthier lives."

Lee recalled other highlights of the year, including the successful touchdown of the InSight lander on Mars, the debut of a first-of-its-kind visual culture program, and the Nobel Prize in Chemistry awarded to Frances Arnold for her pioneering work on directed evolution.

"As you can see," he said, "the work we accomplish at Caltech continues to transform the future, and today's graduates are part of an enduring legacy of discovery and innovation."

Lee then welcomed Commencement speaker France Córdova and spoke of her distinguished scientific career that began at Los Alamos National Laboratory and has included roles as NASA's chief scientist, chancellor of UC Riverside, and president of Purdue University before she took on her present position as director of the NSF.

Lee talked about Córdova's many accomplishments at the agency, including a national initiative to broaden participation in science and engineering among historically underrepresented communities, and her scientific contributions in the areas of observational and experimental astrophysics, multispectral research on X-ray and gamma ray sources, and space-borne instrumentation. 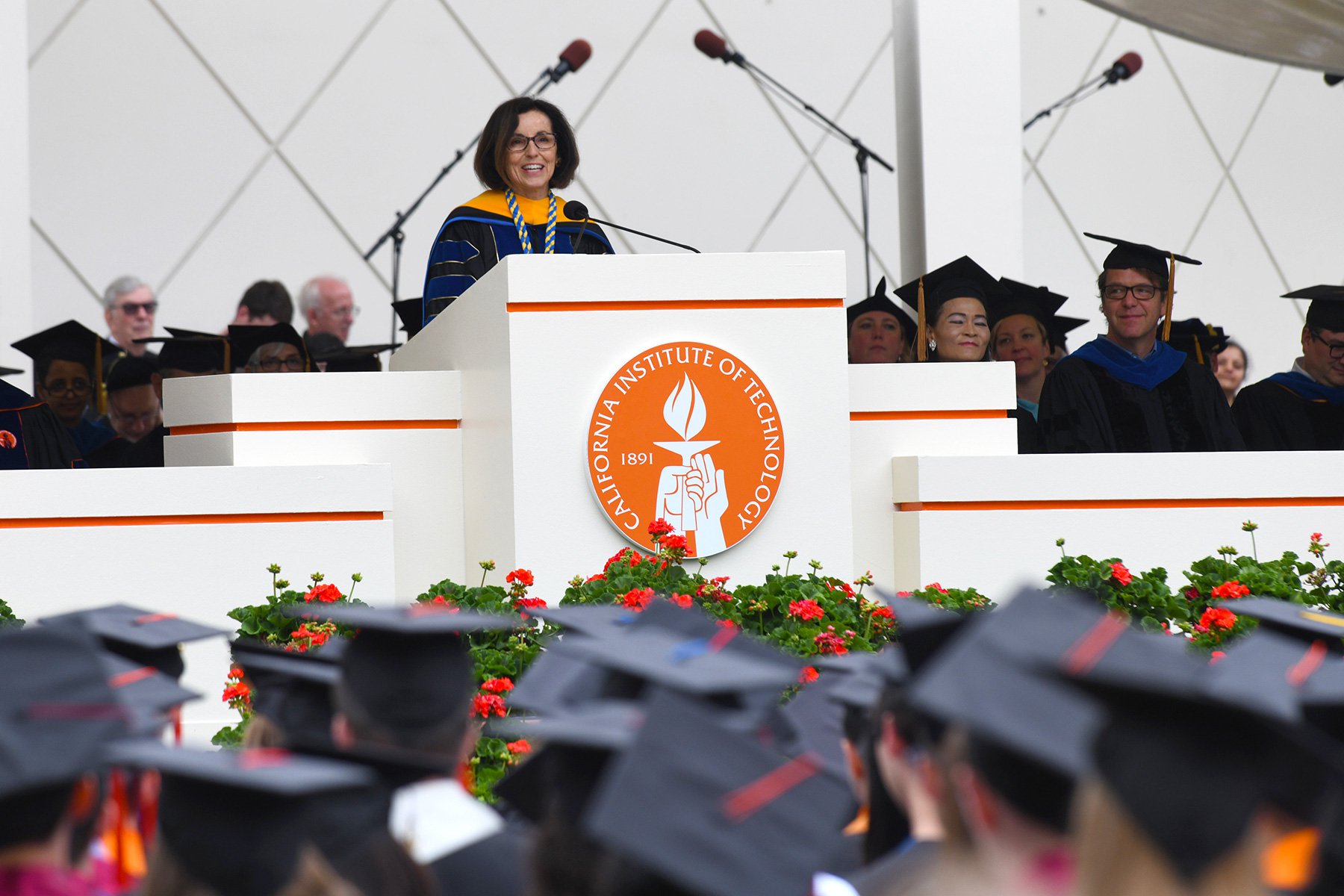 Córdova focused on three broad themes that shaped her own Caltech experience. First, she talked about the value and impact of basic research. "You can draw a line from today's technologies—everything from barcodes to cell phones, to MRI machines to life-saving drugs, to the internet and Google—all the way back to a moment when someone simply wondered why and decided to figure it out."

Córdova spoke of NSF's successful pivot to a strategy that spotlights big ideas with potentially transformative return on investment. To make progress, she noted, "we had to speak up—loudly, clearly—about the benefits of basic research, to explain why it mattered. ... That's a mission that will fall to you as the next generation of scientists, engineers, poets, and seekers of truth."

It was at Caltech, Córdova continued, that she learned the importance of focus. "A century of discoveries and breakthroughs and progress happened here," she said, "because the institution focused on what it can do best." Focus, she added, "is like a lens that bends everything you've learned here, your passion, your skills, to a single point that magnifies all of your efforts."

The third thing Caltech taught her, Córdova said, was to "abandon the idea of myself as a lonely researcher in the basement of the synchrotron lab, working in isolation. Today's landscape is an interdisciplinary one in which teamwork among experts with a wide variety of disciplines matters. …. just look at two of the biggest scientific achievements in the last few years: LIGO (the Laser Interferometer Gravitational-wave Observatory) and the Event Horizon Telescope."

"Wherever you go, remember what brought you here," urged Córdova in closing. "You had a vision of yourself, the big ideas that motivated you. Hold onto that. I came here wanting to be a scientist. I let nothing stop me. Continue to think big, graduates. Let nothing stop you." 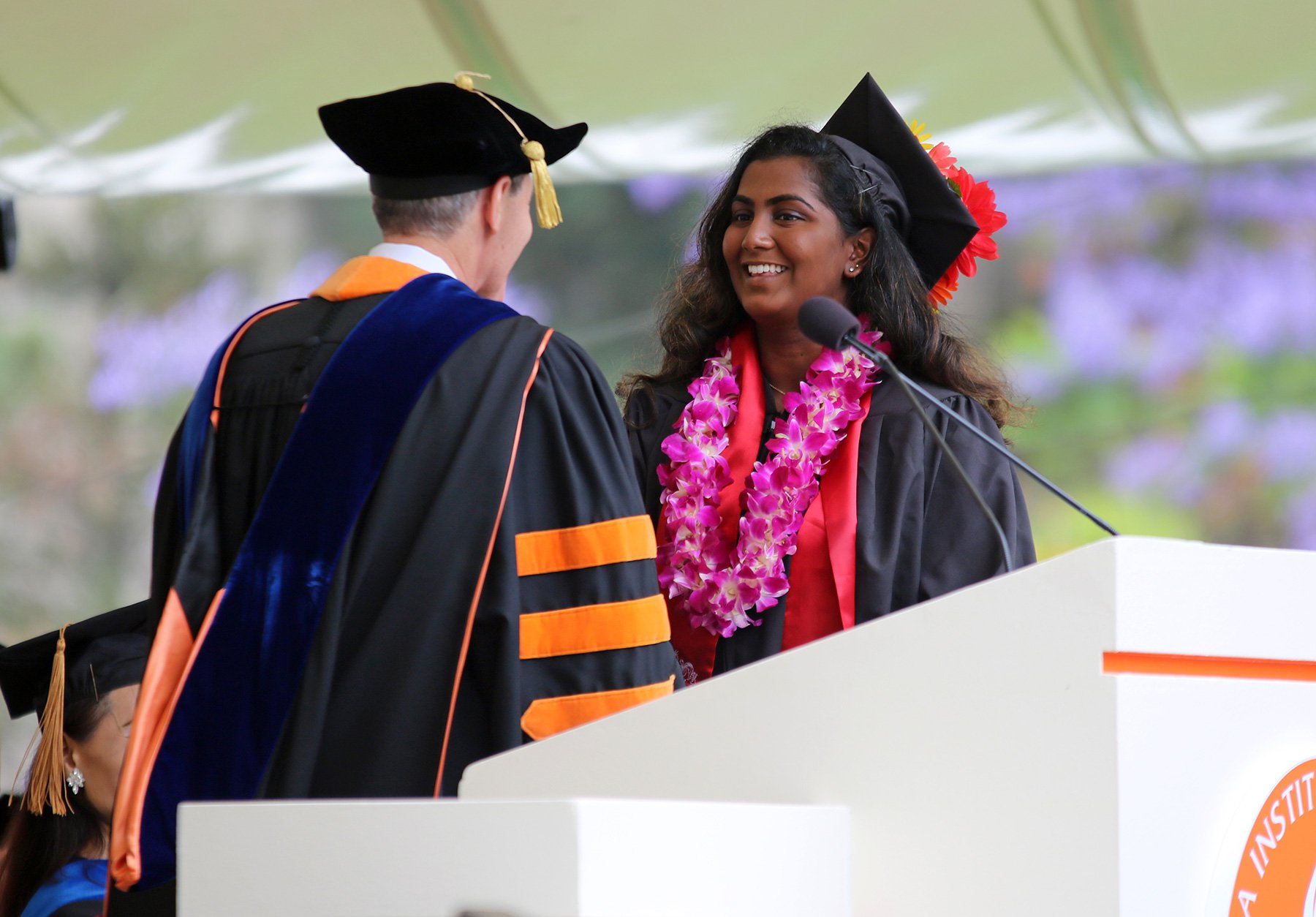 The Mabel Beckman Prize, awarded annually to female juniors or seniors, recognizes academic and personal excellence, contributions to the Institute community, and outstanding character and leadership. It was awarded to Sakthi Vetrivel.

The Frederic W. Hinrichs, Jr., Memorial Award recognizes the seniors who, in the opinion of the undergraduate deans, made the greatest contribution to the student body during their undergraduate years. The award was given to Christopher Johnstone and Kavya Sreedhar.

The George W. Housner Prize for Academic Excellence and Original Research is given to a senior who has demonstrated excellence in scholarship and in the preparation of an outstanding piece of original scientific research. This year's Housner Prize was presented to Julius Oppenheim. Oppenheim was recognized for his work ranging from the shock synthesis of quasicrystals to CO2 reduction and water splitting for solar fuels.

The recipient of the final award, the Milton and Francis Clauser Doctoral Prize, was not known until her name was announced at Commencement. The Clauser Prize is awarded to a student whose PhD thesis reflects extraordinary standards of quality, innovative research, ingenuity, and especially the potential of opening new avenues of human thought and endeavor. This year's recipient was Anupama Lakshmanan for her bioengineering thesis, "Engineering Acoustic Protein Nanostructures for Non-Invasive Molecular Imaging Using Ultrasound." Lakshmanan has played "an instrumental role in launching a new field of research focused on biomolecular ultrasound," said Rosenbaum. Her work, he said, "promises to have significant long-term impact on the way physicians and researchers study, diagnose, and treat disease." 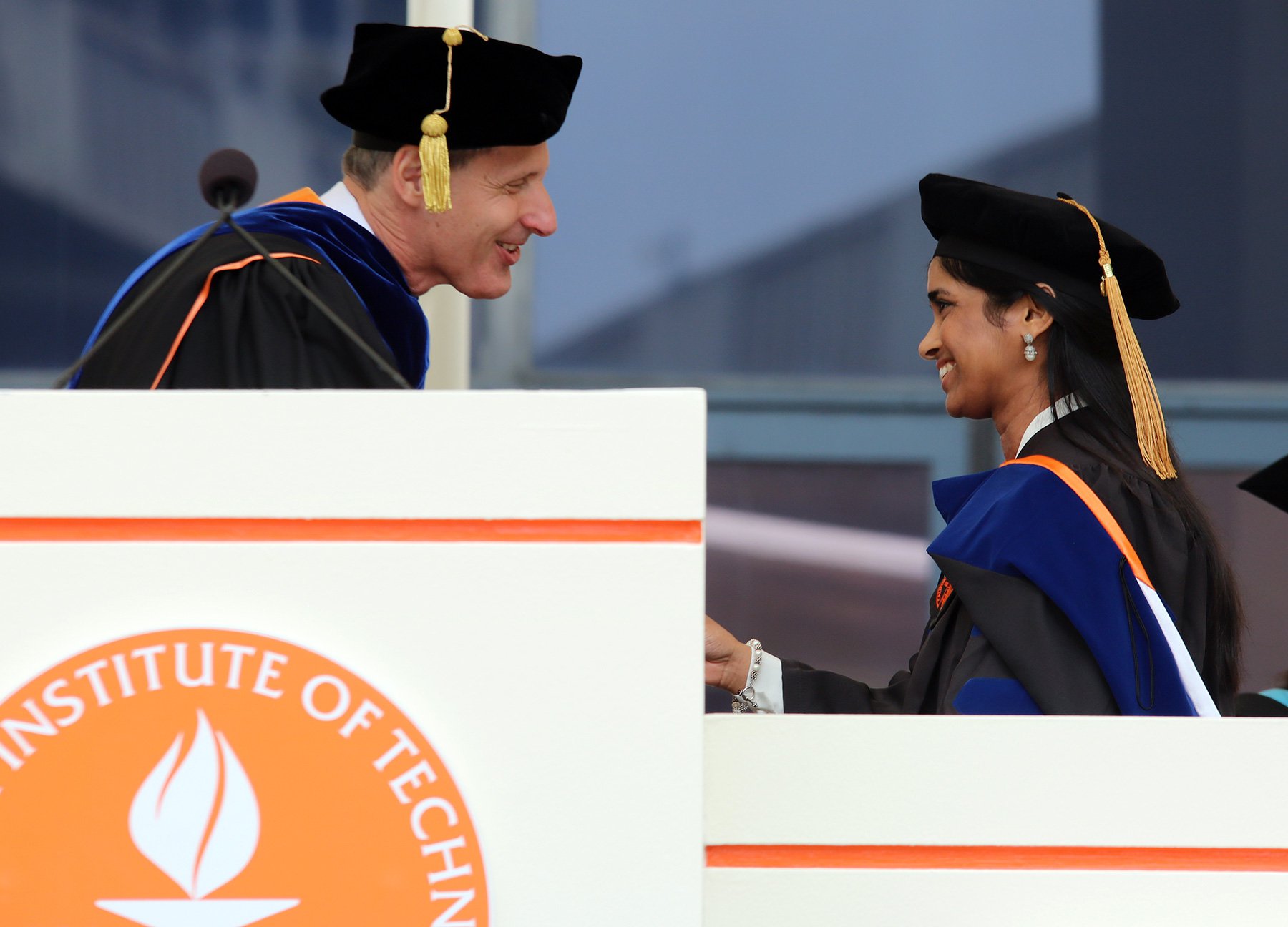 As the ceremony came to an end, Rosenbaum addressed the newest Caltech alumni: "As you, our graduates, take your next steps in life, you have been invited to traverse paths of adventure and to embrace the joy of discovery."

At Caltech, he reminded them, "you have mastered the ability to frame problems. … You are ready to tackle any challenge with your quantitative skills. … You are unafraid to pose the fundamental questions." Beyond that, he said, invoking the Caltech Honor Code, "you have weighed your actions in light of the needs of others in the broadest sense of community. You have taken individual and collective responsibility for the functioning of Institute society."

"I wish you wholeness and magic on your journey forward."

For more photos and videos of the day, visit Caltech's Commencement 2019 Flickr album.