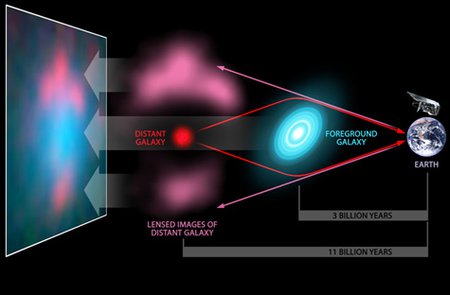 Astronomers estimate that half of the star formation in the universe is obscured by dust—making many distant galaxies in the peak of their star-forming years essentially invisible. But now the invisible has been revealed, thanks to new instruments that can observe in the millimeter, submillimeter, and far-infrared wavelengths in which these galaxies shine. In the November 5 issue of Science, astronomers announce their discovery of five distant, dust-obscured galaxies, magnified by cosmic lenses—galaxies that bend light from a more distant source.

The astronomers noticed the galaxies in images returned by the Herschel Space Observatory, a European Space Agency telescope launched in 2009 to probe the universe in far-infrared and submillimeter wavelengths. Caltech and JPL researchers helped develop Herschel's instruments.

It was a novel Caltech and JPL–designed spectrometer called Z-Spec, on the Caltech Submillimeter Observatory, that revealed the primeval galaxies tucked behind the lenses. Optical telescopes following up on the Herschel data saw only the foreground lensing galaxies.

Z-Spec, which has a bandwidth 10 times bigger than that of other spectrometers for these wavelengths, was able to measure redshifts for four of the five galaxies—the first demonstration that a millimeter-wave spectrometer can consistently provide redshifts for distant galaxies—and confirmed that the light originated when the universe was only two- to four-billion-years old. Z-Spec uses a unique "2-dimensional" spectrometer to realize its large bandwidth while keeping the instrument compact, and is a prototype for an even more capable spectrometer planned for observations in space on the Japanese SPICA far-infrared telescope.