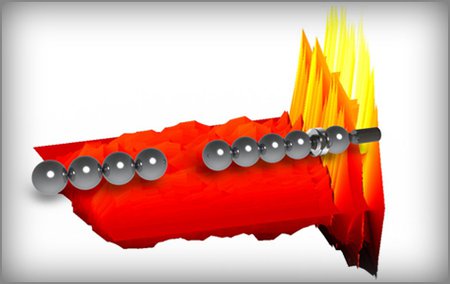 The nonlinearity and asymmetry present in this chain of compressed spheres can transform vibrations of one frequency, applied at one end of the chain, to vibrations with broadband frequency content leading to rectification. The amplitude of the vibrations are shown by the height of the peaks. Credit: Chiara Daraio / Caltech

The nonlinearity and asymmetry present in this chain of compressed spheres can transform vibrations of one frequency, applied at one end of the chain, to vibrations with broadband frequency content leading to rectification. The amplitude of the vibrations are shown by the height of the peaks. Credit: Chiara Daraio / Caltech
Tags:
energy, astronomy & physics, interdisciplinary research, engineering

PASADENA, Calif.— While many hotel rooms, recording studios, and even some homes are built with materials to help absorb or reflect sound, mechanisms to truly control the direction of sound waves are still in their infancy. However, researchers at the California Institute of Technology (Caltech) have now created the first tunable acoustic diode-a device that allows acoustic information to travel only in one direction, at controllable frequencies.

The mechanism they developed is outlined in a paper published on July 24 in the journal Nature Materials.

Borrowing a concept from electronics, the acoustic diode is a component that allows a current—in this case a sound wave—to pass in one direction, while blocking the current in the opposite direction. "We exploited a physical mechanism that causes a sharp transition between transmitting and nontransmitting states of the diode," says Chiara Daraio, professor of aeronautics and applied physics at Caltech and lead author on the study. "Using experiments, simulations, and analytical predictions, we demonstrated the one-way transmission of sound in an audible frequency range for the first time."

This new mechanism brings the idea of true soundproofing closer to reality. Imagine two rooms labeled room A and room B. This new technology, Daraio explains, would enable someone in room A to hear sound coming from room B; however, it would block the same sound in room A from being heard in room B.

"The concept of the one-way transmission of sound could be quite important in architectural acoustics, or the science and engineering of sound control within buildings," says Georgios Theocharis, a postdoctoral scholar in Daraio's laboratory and a co-author of the study.

The system is based on a simple assembly of elastic spheres—granular crystals that transmit the sound vibrations—that could be easily used in multiple settings, can be tuned easily, and can potentially be scaled to operate within a wide range of frequencies, meaning its application could reach far beyond soundproofing.

Similar systems have been demonstrated by other scientists, but they all feature smooth transitions between transmitting and nontransmitting states instead of the sharp transitions needed to be more effective at controlling the flow of sound waves. To obtain the sharp transition, the team created a periodic system with a small defect that supports this kind of quick change from an "on" to an "off" transmission state. According to Daraio, this means the system is very sensitive to small variations of operational conditions, like pressure and movement, making it useful in the development of ultrasensitive acoustic sensors to detect sound waves. The system can also operate at different frequencies of sound and is capable of downshifting, or reducing the frequency of the traveling signals, as needed.

"We propose to use these effects to improve energy-harvesting technologies," she says. "For example, we may be able to scavenge sound energy from undesired structural vibrations in machinery by controlling the flow of sound waves away from the machinery and into a transducer. The transducer would then convert the sound waves into electricity." Daraio says the technology can also shift the undesired frequencies to a range that enables a more efficient conversion to electricity.

The team plans to continue studying the fundamental properties of these systems, focusing on their potential application to energy-harvesting systems. They also believe that these systems may be applicable to a range of technologies including biomedical ultrasound devices, advanced noise control, and even thermal materials aimed at temperature control.

"Because the concepts governing wave propagation are universal to many systems, we envision that the use of this novel way to control energy might enable the design of many advanced thermal and acoustic materials and devices," says Daraio.

The Nature Materials paper is titled "Bifurcation-based acoustic switching and rectification." Nicholas Boechler, a former Ph.D. student at Caltech, is also an author on the study.

The research was supported by the National Science Foundation, the Office of Naval Research, and the A. S. Onassis Benefit Foundation.