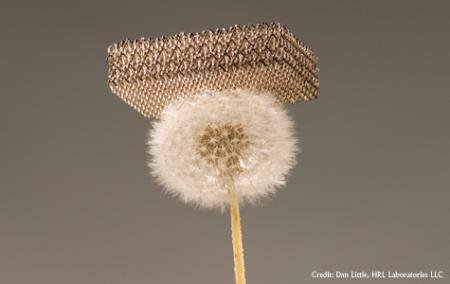 Caltech engineers and scientists often work at the frontiers of science—pushing the limits of what is known and what is possible. Now, with its eighth annual Breakthrough Awards, Popular Mechanics magazine is recognizing two projects that fall into this category and in which Caltech faculty members have played major roles—the development of ultralight micro-lattices by materials scientist Julia Greer and colleagues, and the Voyager 1 and 2 missions, whose project scientist, physicist Ed Stone, has been at Caltech for the missions' entire 35-year ride.

The Breakthrough Awards recognize "innovators and products that have dramatically advanced the fields of technology, medicine, space exploration, automotive design, environmental engineering and more."  This year's recipients will receive their awards during a ceremony on October 4 in New York City.

"I am delighted that Professor Greer is being honored with this award," says Ares Rosakis, chair of the Division of Engineering and Applied Science (EAS) at Caltech. "She is a great example of how we in EAS are working at the edges of fundamental science to invent the technologies of the future."

Greer, an assistant professor of materials science and mechanics at Caltech, is being honored as part of the team that engineered a metallic lattice celebrated late last year as the world's lightest solid material. Including engineers and researchers from HRL Laboratories and UC Irvine, the team was able to make three-dimensional lattices composed of tiny, metallic hollow tubes. The end product has a density of just 0.9 milligrams per cubic centimeter, making it approximately 100 times lighter than Styrofoam.

"Having developed the micro-truss is a nice beginning," says Greer, "but it's not the end of the story in any way. Now we can start dreaming big, developing completely new materials for a variety of applications, without being limited by their classical processing routes."

In fact, since the group described the micro-trusses in the journal Science in November 2011, Greer has received several grants to work on potential applications ranging from lightweight, damage-tolerant, and radiation-resistant materials for use in space to planar structures that could hold thousands of modular solar cells at different angles in order to capture more of the solar spectrum.

Stone, the David Morrisroe Professor of Physics at Caltech, will accept a special Mechanical Lifetime Achievement Award on behalf of the entire Voyager team, along with Suzanne Dodd (BS '84), the project manager, and Jefferson Hall, the mission flight director. The Voyager spacecraft were built by the Jet Propulsion Laboratory (JPL), which continues to operate both. Caltech manages JPL for NASA.

Voyager 1 recently celebrated the 35th anniversary of its launch in 1977. It lifted off just 16 days after its twin, Voyager 2 (which reached Jupiter second despite being the first to launch). The long-lasting probes have revealed much about our solar system—"things we hadn't really thought about or imagined," Stone says. Today, both spacecraft continue to relay data, and Voyager 1 is expected to enter interstellar space soon.

"We are once again excited to recognize this year's list of incredible honorees for their role in shaping the future," said James B. Meigs, editor-in-chief of Popular Mechanics, in a press release. "From a featherweight metal to the world's fastest and most electrically efficient supercomputer, this year's winners embody the creative spirit that the Breakthrough Awards were founded upon."

The winners were chosen by the editors of the magazine after recommendations were solicited from a wide range of experts and past Breakthrough Award winners, in fields ranging from aerospace and robotics to medicine and energy.

To read more about all of the awards, visit the Popular Mechanics website. Full descriptions are also available in the magazine's November issue, available on newsstands October 16.