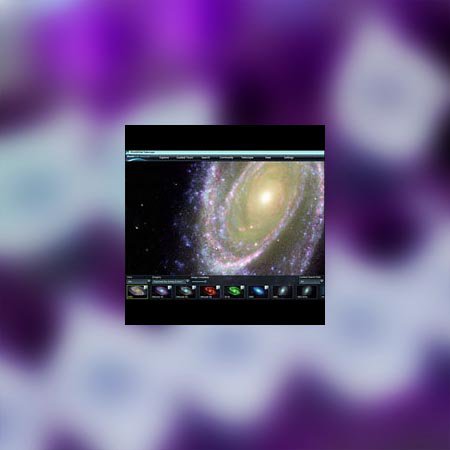 PASADENA, Calif.-- Panoramic images of the sky obtained at Palomar Observatory and by the Two Micron All Sky Survey (2MASS), plus pointed observations from the Spitzer Space Telescope, form a significant part of the "World Wide Telescope" (WWT), a new product released today by Microsoft aimed at bringing exploration of the Universe and its many wonders to the general public.

WorldWide Telescope is a rich Web application that combines imagery from the best ground- and space-based observatories across the world, stitching together terabytes of high-resolution images of celestial bodies and displaying them in a way that relates to their actual relative position in the sky. Using their own computers, people from all walks of life can freely browse through the solar system, galaxy, and beyond. They can choose which telescope they want to look through, including NASA's Hubble, Chandra, and Spitzer Telescopes, to view the locations of planets in the night sky--in the past, present or future--and the universe through different wavelengths of light to reveal hidden structures in other parts of the galaxy. Taken as a whole, the application provides a top-to-bottom view of the science of astronomy.

"The progression from William and Caroline Herschel's visual catalogs in the late 1700s to digital pictures available to anyone with a home computer shows the amazing advances in astronomy over two centuries, and also the continuity of our subject," says Wallace Sargent, Ira S. Bowen Professor of Astronomy at the California Institute of Technology. Scientists at Caltech provided many of the images displayed in WWT and are working with the Microsoft team to enrich and expand the content and the educational possibilities offered by the application.

The WWT combines cosmic imagery and educational content from many sources, including major ground-based sky surveys. One of those was the survey conducted at Palomar Observatory in visible light; another was the 2MASS survey in the infrared. Both projects are managed and distributed at Caltech's Infrared Processing and Analysis Center (IPAC).

Palomar Observatory, which is operated by Caltech, has conducted a number of major sky surveys since the 1950s, initially with photographic plates, and now with modern digital detectors. The surveys are conducted using the 48-inch Samuel Oschin Telescope.

Images of the northern sky used in the WWT are based on the second major photographic Palomar Sky Survey (POSS-II), conducted in the late 1980s and early 1990s. A digital version of this survey was produced in collaboration with the Space Telescope Science Institute in Baltimore, Maryland, and processed and calibrated at Caltech under the leadership of Caltech Professor of Astronomy S. George Djorgovski. This survey has detected over 50 million galaxies and about a billion stars, as well as many other interesting objects. Additional images for the WWT were provided by the currently ongoing Palomar-Quest digital sky survey. All of the images were processed at Caltech's Center for Advanced Computing Research (CACR). "Astronomy is now a computationally intensive field. We hope to use the WWT as a gateway to learning, not just about astronomy, but also about information technology and computational thinking, which are so important for all aspects of modern scholarship and society," says Roy Williams of CACR.

Using data collected from twin 1.3-meter telescopes in Arizona and Chile over a 3.5-year period, 2MASS produced the first high-resolution digital survey of the complete infrared sky, providing the international astronomical community with an unprecedented global view of the Milky Way and nearby galaxies. 2MASS was the most thorough census ever made of the Milky Way galaxy and the nearby universe. It detected infrared wavelengths, which are longer than the red light in the rainbow of visible colors. Infrared light penetrates dust more effectively than visible light, so it is particularly useful for detecting objects obscured within the Milky Way, as well as the faint heat of very cool objects that give off very little visible light of their own.

"Humans have always been fascinated by the universe, by the starry sky," says Djorgovski. "We are hoping to help reignite that sense of wonder and exploration among students and curious people everywhere."

More information is available at the following:

WorldWide Telescope can be accessed at http://www.worldwidetelescope.org/