Findings Help Pave Way for Next Generation of Computer Chips 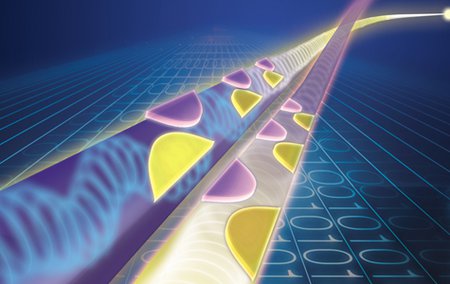 PASADENA, Calif.—Stretching for thousands of miles beneath oceans, optical fibers now connect every continent except for Antarctica. With less data loss and higher bandwidth, optical-fiber technology allows information to zip around the world, bringing pictures, video, and other data from every corner of the globe to your computer in a split second. But although optical fibers are increasingly replacing copper wires, carrying information via photons instead of electrons, today's computer technology still relies on electronic chips.

Now, researchers led by engineers at the California Institute of Technology (Caltech) are paving the way for the next generation of computer-chip technology: photonic chips. With integrated circuits that use light instead of electricity, photonic chips will allow for faster computers and less data loss when connected to the global fiber-optic network.

"We want to take everything on an electronic chip and reproduce it on a photonic chip," says Liang Feng, a postdoctoral scholar in electrical engineering and the lead author on a paper to be published in the August 5 issue of the journal Science. Feng is part of Caltech's nanofabrication group, led by Axel Scherer, Bernard A. Neches Professor of Electrical Engineering, Applied Physics, and Physics, and co-director of the Kavli Nanoscience Institute at Caltech.

In that paper, the researchers describe a new technique to isolate light signals on a silicon chip, solving a longstanding problem in engineering photonic chips.

An isolated light signal can only travel in one direction. If light weren't isolated, signals sent and received between different components on a photonic circuit could interfere with one another, causing the chip to become unstable. In an electrical circuit, a device called a diode isolates electrical signals by allowing current to travel in one direction but not the other. The goal, then, is to create the photonic analog of a diode, a device called an optical isolator. "This is something scientists have been pursuing for 20 years," Feng says.

Normally, a light beam has exactly the same properties when it moves forward as when it's reflected backward. "If you can see me, then I can see you," he says. In order to isolate light, its properties need to somehow change when going in the opposite direction. An optical isolator can then block light that has these changed properties, which allows light signals to travel only in one direction between devices on a chip.

"We want to build something where you can see me, but I can't see you," Feng explains. "That means there's no signal from your side to me. The device on my side is isolated; it won't be affected by my surroundings, so the functionality of my device will be stable."

To isolate light, Feng and his colleagues designed a new type of optical waveguide, a 0.8-micron-wide silicon device that channels light. The waveguide allows light to go in one direction but changes the mode of the light when it travels in the opposite direction.

A light wave's mode corresponds to the pattern of the electromagnetic field lines that make up the wave. In the researchers' new waveguide, the light travels in a symmetric mode in one direction, but changes to an asymmetric mode in the other. Because different light modes can't interact with one another, the two beams of light thus pass through each other.

Previously, there were two main ways to achieve this kind of optical isolation. The first way—developed almost a century ago—is to use a magnetic field. The magnetic field changes the polarization of light—the orientation of the light's electric-field lines—when it travels in the opposite direction, so that the light going one way can't interfere with the light going the other way. "The problem is, you can't put a large magnetic field next to a computer," Feng says. "It's not healthy."

The second conventional method requires so-called nonlinear optical materials, which change light's frequency rather than its polarization. This technique was developed about 50 years ago, but is problematic because silicon, the material that's the basis for the integrated circuit, is a linear material. If computers were to use optical isolators made out of nonlinear materials, silicon would have to be replaced, which would require revamping all of computer technology. But with their new silicon waveguides, the researchers have become the first to isolate light with a linear material.

Although this work is just a proof-of-principle experiment, the researchers are already building an optical isolator that can be integrated onto a silicon chip. An optical isolator is essential for building the integrated, nanoscale photonic devices and components that will enable future integrated information systems on a chip. Current, state-of-the-art photonic chips operate at 10 gigabits per second (Gbps)—hundreds of times the data-transfer rates of today's personal computers—with the next generation expected to soon hit 40 Gbps. But without built-in optical isolators, those chips are much simpler than their electronic counterparts and are not yet ready for the market. Optical isolators like those based on the researchers' designs will therefore be crucial for commercially viable photonic chips.

In addition to Feng and Scherer, the other authors on the Science paper, "Non-reciprocal light propagation in a silicon photonic circuit," are Jingqing Huang, a Caltech graduate student; Maurice Ayache of UC San Diego and Yeshaiahu Fainman, Cymer Professor in Advanced Optical Technologies at UC San Diego; and Ye-Long Xu, Ming-Hui Lu, and Yan-Feng Chen of the Nanjing National Laboratory of Microstructures in China. This research was done as part of the Center for Integrated Access Networks (CIAN), one of the National Science Foundation's Engineering Research Centers. Fainman is also the deputy director of CIAN. Funding was provided by the National Science Foundation, and the Defense Advanced Research Projects Agency.