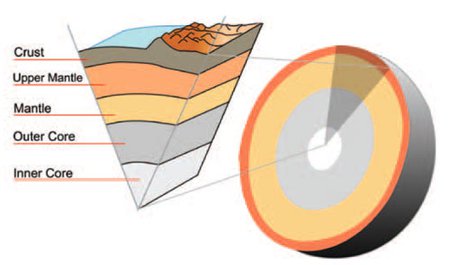 PASADENA, Calif.—Using a diamond-anvil cell to recreate the high pressures deep within the earth, researchers at the California Institute of Technology (Caltech) have found unusual properties in an iron-rich magnesium- and iron-oxide mineral that may explain the existence of several ultra-low velocity zones (ULVZs) at the core-mantle boundary. A paper about their findings was published in a recent issue of Geophysical Research Letters (GRL).

ULVZs—which were first discovered in the early 1990s by researchers at Caltech led by Donald V. Helmberger, Smits Family Professor of Geological and Planetary Sciences—are found in a patchwork distribution just above the core-mantle boundary, which is located at a depth of 2,900 kilometers. In the ULVZs, which range from a few kilometers to tens of kilometers in depth and are up to 100 kilometers across, the velocities of seismic waves slow down by up to 30 percent.

Previously, geophysicists had suggested that the ULVZs might be composed of liquid-bearing, partially melted materials; in this region of the lower mantle, the earth is solid—but plastic and flowing—rock. The idea was that if these rocks contained some liquid, seismic waves would propagate more slowly through them. And, indeed, "the area is very hot and close to the core," says Jennifer M. Jackson, assistant professor of mineral physics at Caltech and coauthor of the GRL paper. The catch, she says, "is that the temperature and composition of this region are not very well known." In addition, she says, "these ULVZs are not always associated with surface hot spots" such as the Hawaiian islands.

Instead of being patches of partially melted (i.e., liquid-bearing) rock, the ULVZs—Jackson and her colleagues believe—are composed of an entirely solid, compositionally distinctive rock type with unusual properties that cause sound waves to slow down. "What we're suggesting here is that many ULVZs—it need not be all of them—are likely to be solid, not molten," Jackson says.

In reaching this conclusion, Jackson and her team studied the properties of iron-rich magnesium-iron oxides [(Mg, Fe)O]—similar to the mineral periclase known at the earth's surface—using specially prepared diamond-anvil cells. Within the piston-like chamber of the 4-inch-tall cell, two semiflawless natural diamonds—a quarter of a carat each—were squeezed together, sandwiching a small sample of the oxide and proportionally increasing its pressure.

After the pressurized samples were created, they were taken to the Advanced Photon Source at Argonne National Laboratory in Illinois and exposed to X-rays, causing the scattering of photons at energies related to the speed at which sound would travel through.

Jackson and her colleagues conducted the measurements at pressures ranging from ambient pressure (at Earth's surface) up to 121 Gigapascals (GPa)—or over 17 million pounds per square inch, equivalent to about 2700 km depth. "The measurements stopped at pressures where the diamond-anvils broke," Jackson says.

Normally, solid materials increase in stiffness under increasing pressure, causing sound waves to travel at higher and higher velocities. But in iron-rich (Mg,Fe)O, the sound velocities took a surprising and significant dip of about 10 percent at just under 28 GPa. The sound velocities in the minerals did not return to their ambient-pressure levels until pressures of 50 to 60 GPa were reached.

To their surprise, the researchers found they could compress the iron-rich mineral to very high pressures and very high densities, "and yet it is still highly compressible" Jackson says. In fact, even at 121 GPa, sound velocities in the mineral were still much lower than in other known mantle materials. "It's quite unusual to have a solid this compressible under these pressures. Compared to silicate"—the main constituent of Earth's crust—"at the same pressures, it's like squishing a pat of butter between two bricks."

Jackson and her colleagues suspect that the velocity drops in this particular mineral are related to magnetic transitions that can make iron-rich oxides more compressible than many silicates. "Silicate acts more like a very stiff spring; iron-rich oxide is like a very weak spring," she explains. With increasing pressure, "the iron-oxide goes through a series of complex magnetic transitions that couple to its sound waves"—and thus explain the unusually low velocities, even at extremely high pressures. "But," she adds, "because the mineral is so iron-rich, it is likely only to exist near the core."

While the new result does not rule out partial melting as a cause of some ULVZs, Jackson says, "iron-rich periclase certainly provides one of the most robust explanations so far."

"The composition of the boundary layer between the earth's liquid outer core and silicate mantle not only influences the current thermal and chemical evolution of the earth's interior, but may hold the key to unlocking the planet's past thermo-chemical evolution," she says. "The iron-rich periclase patches may be fossil remnants of large-scale melting events occurring billions of years ago inside the earth. Having an iron-rich oxide in contact with the earth's core would facilitate propagation of the planet's magnetic field and contribute to the dynamic coupling between the core and the mantle."

The paper, "Very low sound velocities in iron-rich (Mg,Fe)O: Implications for the core-mantle boundary," was coauthored by Caltech graduate student June K. Wicks and Wolfgang Sturhahn, formerly at Argonne National Laboratory and now at the Jet Propulsion Laboratory. The work was funded by the National Science Foundation and the U.S. Department of Energy's Office of Basic Energy Sciences.