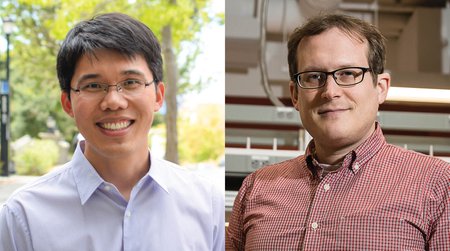 Two Caltech faculty members have been awarded Sloan Research Fellowships for 2021: Nick Hutzler (BS '07), assistant professor of physics at Caltech, and Wei Gao, assistant professor of medical engineering. Awarded by the Alfred P. Sloan Foundation, the two-year fellowships "seek to stimulate fundamental research by early-career scientists and scholars of outstanding promise," according to the foundation's website.

Hutzler probes the fundamental laws of physics through tabletop experiments. With the help of laser beams, he makes very precise measurements of atoms and molecules to search for new particles and forces and "broken symmetries" in the laws of physics. Hutzler's work may help solve the question of what happened to all the antimatter in our universe; researchers believe that very early on in the formation of the universe, broken symmetries may have tipped the balance of matter such that antimatter disappeared. His research also has applications in quantum science: the same laser-based methods he uses for fundamental physics research are useful for controlling and engineering molecular interactions to study quantum information, matter, and chemistry.

Hutzler received his PhD from Harvard University in 2014. He joined the Caltech faculty in 2017.

Gao's research examines the ways that nanotechnologies can be used to create noninvasive medical treatments and wearable devices for monitoring health conditions. He has developed sensors that can identify minute levels of compounds in human sweat that are indicators of stress levels, metabolic conditions, and sensors for detecting a SARS-CoV-2 infection (SARS-CoV-2 is the virus responsible for COVID-19). He has also designed wearable devices that power themselves with human sweat or body motion, eliminating the need for batteries or other external power sources. More recently, he has begun working with NASA to develop devices for monitoring the health of astronauts.

Gao received his PhD in chemical engineering from UC San Diego in 2014. He joined the Caltech faculty in 2017.