Caltech Researchers Find That Disorder Is Key to Nanotube Mystery 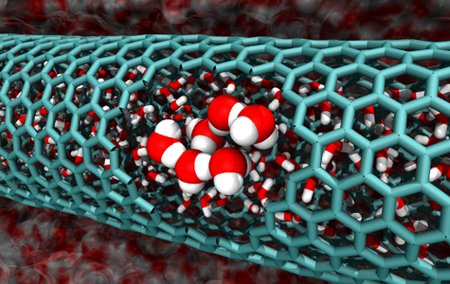 PASADENA, Calif.—Scientists often find strange and unexpected things when they look at materials at the nanoscale—the level of single atoms and molecules. This holds true even for the most common materials, such as water.

Case in point: In the last couple of years, researchers have observed that water spontaneously flows into extremely small tubes of graphite or graphene, called carbon nanotubes. This unexpected observation is intriguing because carbon nanotubes hold promise in the emerging fields of nanofluidics and nanofiltration, where nanotubes might be able to help maintain tiny flows or separate impurities from water. However, no one has managed to explain why, at the molecular level, a stable liquid would want to confine itself to such a small area.

Now, using a novel method to calculate the dynamics of water molecules, Caltech researchers believe they have solved the mystery. It turns out that entropy, a measurement of disorder, has been the missing key.

"It's a pretty surprising result," says William Goddard, the Charles and Mary Ferkel Professor of Chemistry, Materials Science, and Applied Physics at Caltech and director of the Materials and Process Simulation Center. "People normally focus on energy in this problem, not entropy."

That's because water forms an extensive network of hydrogen bonds, which makes it very stable. Breaking those strong interactions requires energy. And since some bonds have to be broken in order for water to flow into small nanotubes, it would seem unlikely that water would do so freely.

"What we found is that it's actually a trade off," Goddard says. "You lose some of that good energy stabilization from the bonding, but in the process you gain in entropy."

Entropy is one of the driving forces that determine whether a process will occur spontaneously. It represents the number of ways a system can exist in a particular state.  The more arrangements available to a system, the greater its disorder, and the higher the entropy. And in general, nature proceeds toward disorder.

When water is ideally bonded, all of the hydrogen bonds lock the molecules into place, restricting their freedom and keeping water's entropy low.  What Goddard and postdoctoral scholar Tod Pascal found is that in the case of some nanotubes, water gains enough entropy by entering the tubes to outweigh the energy losses incurred by breaking some of its hydrogen bonds. Therefore, water flows spontaneously into the tubes.

Goddard and Pascal explain their findings in a paper recently published in the Proceedings of the National Academy of Sciences (PNAS). They looked at carbon nanotubes with diameters between 0.8 and 2.7 nanometers and found three different reasons why water would flow freely into the tubes, depending on diameter.

For the smallest nanotubes—those between 0.8 and 1.0 nanometers in diameter—the tubes are so minuscule that water molecules line up nearly single file within them and take on a gaslike state.  That means the normal bonded structure of liquid water breaks down, giving the molecules greater freedom of motion. This increase in entropy draws water into the tubes.

At the next level, where the nanotubes have diameters between 1.1 and 1.2 nanometers, confined water molecules arrange themselves in stacked, icelike crystals. Goddard and Pascal found such nanotubes to be the perfect size—a kind of Goldilocks match—to accommodate crystallized water. These crystal-bonding interactions, not entropy, make it favorable for water to flow into the tubes.

On the largest scale studied—involving tubes whose diameters are still only 1.4 to 2.7 nanometers wide—the researchers found that the confined water molecules behave more like liquid water. However, once again, some of the normal hydrogen bonds are broken, so the molecules exhibit more freedom of motion within the tubes. And the gains in entropy more than compensate for the loss in hydrogen bonding energy.

Because the insides of the carbon nanotubes are far too small for researchers to examine experimentally, Goddard and Pascal studied the dynamics of the confined water molecules in simulations. Using a new method developed by Goddard's group with a supercomputer, they were able to calculate the entropy for the individual water molecules. In the past, such calculations have been difficult and extremely time-consuming. But the new approach, dubbed the two-phase thermodynamic model, has made the determination of entropy values relatively easy for any system.

"The old methods took eight years of computer processing time to arrive at the same entropies that we're now getting in 36 hours," Goddard says.

The team also ran simulations using an alternative description of water—one where water had its usual properties of energy, density, and viscosity, but lacked its characteristic hydrogen bonding. In that case, water did not want to flow into the nanotubes, providing additional proof that water's naturally occurring low entropy due to extensive hydrogen bonding leads to it spontaneously filling carbon nanotubes when the entropy increases.

Goddard believes that carbon nanotubes could be used to design supermolecules for water purification. By incorporating pores with the same diameters as carbon nanotubes, he thinks a polymer could be made to suck water out of solution. Such a potential application points to the need for a greater understanding of water transport through carbon nanotubes.

The paper, "Entropy and the driving force for the filling of carbon nanotubes with water," appeared in the July 19 issue of PNAS. Yousung Jung of the Korea Advanced Institute of Science and Technology (KAIST) also contributed to the study. Yousung completed a postdoctoral fellowship at Caltech under Nobel Prize winner Rudy Marcus before joining the faculty at KAIST, where he and Goddard are participating in the World Class University program of Korea. They are developing practical systems as part of the Energy, Environment, Water, and Sustainability Initiative, which provided the supercomputers used in this research.