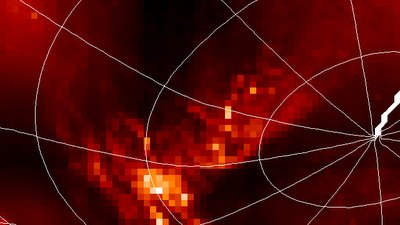 Fingers of fog can be seen moving across the south pole of Titan in this image constructed by Mike Brown and his colleagues using data from the Cassini spacecraft. The fog shows regions where pools of liquid methane sitting on the surface of Titan are evaporating into the atmosphere. After a long summer of frequent clouds and rain at the south pole, it appears in this late summer image that evaporating liquid methane covers large areas of the pole. Credit: Mike Brown/Caltech

Fingers of fog can be seen moving across the south pole of Titan in this image constructed by Mike Brown and his colleagues using data from the Cassini spacecraft. The fog shows regions where pools of liquid methane sitting on the surface of Titan are evaporating into the atmosphere. After a long summer of frequent clouds and rain at the south pole, it appears in this late summer image that evaporating liquid methane covers large areas of the pole. Credit: Mike Brown/Caltech

PASADENA, Calif.—Saturn's largest moon, Titan, looks to be the only place in the solar system—aside from our home planet, Earth—with copious quantities of liquid (largely, liquid methane and ethane) sitting on its surface. According to planetary astronomer Mike Brown of the California Institute of Technology (Caltech), Earth and Titan share yet another feature, which is inextricably linked with that surface liquid: common fog.

The presence of fog provides the first direct evidence for the exchange of material between the surface and the atmosphere, and thus of an active hydrological cycle, which previously had only been known to exist on Earth.

In a talk to be delivered December 18 at the American Geophysical Union's 2009 Fall Meeting in San Francisco, Brown, the Richard and Barbara Rosenberg Professor and professor of planetary astronomy, details evidence that Titan's south pole is spotted "more or less everywhere" with puddles of methane that give rise to sporadic layers of fog. (Technically, fog is just a cloud or bank of clouds that touch the ground).

Brown and his colleagues also describe their findings in a recent paper published in The Astrophysical Journal Letters.

The researchers made their discovery using data from the Visual and Infrared Mapping Spectrometer (VIMS) onboard the Cassini spacecraft, which has been observing Saturn's system for the past five years.

The VIMS instrument provides "hyperspectral" imaging, covering a large swath of the visible and infrared spectrum. Brown and his colleagues—including Caltech undergraduate students Alex Smith and Clare Chen, who were working with Brown as part of a Summer Undergraduate Research Fellowship (SURF) project—searched public online archives to find all Cassini data collected over the moon's south pole from October 2006 through March 2007. They filtered the data to separate out features occurring at different depths in the atmosphere, ranging from 20 kilometers (12.4 miles) to .25 kilometers (820 feet) above the surface. Using other filters, they homed in on "bright" features caused by the scattering of light off small particles—such as the methane droplets present in clouds.

In this way, they isolated clouds located about 750 meters (less than a half-mile) above the ground. These clouds did not extend into the higher altitudes—into the moon's troposphere, where regular clouds form. In other words, says Brown, they had found fog.

"Fog—or clouds, or dew, or condensation in general—can form whenever air reaches about 100 percent humidity," Brown says. "There are two ways to get there. The first is obvious: add water (on Earth) or methane (on Titan) to the surrounding air. The second is much more common: make the air colder so it can hold less water (or liquid methane), and all of that excess needs to condense."

This, he explains, is the same process that causes water droplets to form on the outside of a cool glass.

On Earth, this is the most common method of making fog, Brown says. "That fog you often see at sunrise hugging the ground is caused by ground-level air cooling overnight, to the point where it cannot hang onto its water. As the sun rises and the air heats, the fog goes away."

Similarly, fog can form when wet air passes over cold ground; as the air cools, the water condenses. And mountain fog occurs when air gets pushed up the side of a mountain and cools, causing the water to condense.

However, none of these mechanisms work on Titan.

The reason is that Titan's muggy atmosphere takes a notoriously long time to cool (or warm). "If you were to turn the sun totally off, Titan's atmosphere would still take something like 100 years to cool down," Brown says. "Even the coldest parts of the surface are much too warm to ever cause fog to condense."

Mountain fog is also out of the question, he adds. "A Titanian mountain would have to be about 15,000 feet high before the air would get cold enough to condense," he says. And yet the tallest mountains the moon could possibly carry (because of its fragile, icy crust) would be no more than 3000 feet high.

The only possible way to make Titanian fog, then, is to add humidity to the air. And the only way to do that, Brown says, is by evaporating liquid—in this case, methane, the most common hydrocarbon on the moon, which exists in solid, liquid, and gaseous forms.

Brown notes that evaporating methane on Titan "means it must have rained, and rain means streams and pools and erosion and geology. The presence of fog on Titan proves, for the first time, that the moon has a currently active methane hydrological cycle."

The presence of fog also proves that the moon must be dotted with methane pools, Brown says. That's because any ground-level air, after becoming 100 percent humid and turning into fog, would instantly rise up into the atmosphere like a giant cumulus cloud. "The only way to make the fog stick around on the ground is to both add humidity and cool the air just a little," he explains. "The way to cool the air just a little is to have it in contact with something cold, like a pool of evaporating liquid methane."

In addition to Smith and Chen, The Astrophysical Journal Letters paper, "Discovery of Fog at the South Pole of Titan," was coauthored by Máté Ádámkovics from the University of California, Berkeley. The work was funded by a grant from the National Science Foundation's Planetary Astronomy program.

For more information about the discovery, go to Brown's blog at http://www.mikebrownsplanets.com/2009/08/fog-titan-titan-fog-and-peer-review.html.