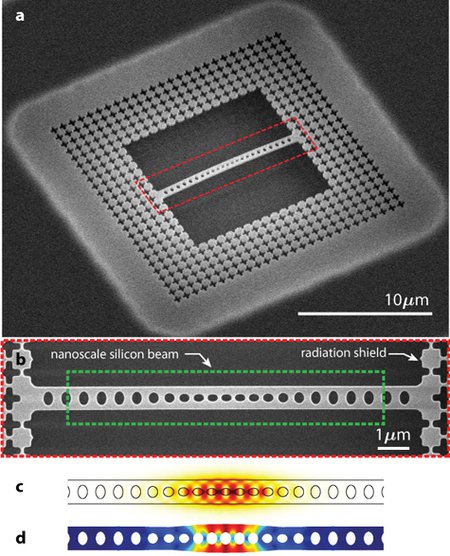 A scanning electron microscope image (a) of the nanoscale silicon mechanical resonator used in the laser cooling experiment. The outer â€œcrossâ€ patterning forms the shield while the central beam region, the SEM image of which is shown in (b), forms an optical cavity where laser light is used to cool the mechanical motion of the beam. Numerical simulations of the localized optical field and mechanical breathing motion of the nanobeam are shown in panels (c) and (d), respectively. Credit: Caltech/Painter, et al.

A scanning electron microscope image (a) of the nanoscale silicon mechanical resonator used in the laser cooling experiment. The outer â€œcrossâ€ patterning forms the shield while the central beam region, the SEM image of which is shown in (b), forms an optical cavity where laser light is used to cool the mechanical motion of the beam. Numerical simulations of the localized optical field and mechanical breathing motion of the nanobeam are shown in panels (c) and (d), respectively. Credit: Caltech/Painter, et al.
Tags:
quantum science, engineering, astronomy & physics, interdisciplinary research, materials science

PASADENA, Calif.—For the first time, researchers at the California Institute of Technology (Caltech), in collaboration with a team from the University of Vienna, have managed to cool a miniature mechanical object to its lowest possible energy state using laser light. The achievement paves the way for the development of exquisitely sensitive detectors as well as for quantum experiments that scientists have long dreamed of conducting.

"We've taken a solid mechanical system—one made up of billions of atoms—and used optical light to put it into a state in which it behaves according to the laws of quantum mechanics. In the past, this has only been achieved with trapped single atoms or ions," says Oskar Painter, professor of applied physics and executive officer for applied physics and materials science at Caltech and the principal investigator on a paper describing the work that appears in the October 6 issue of the journal Nature.

As described in the paper, Painter and his colleagues have engineered a nanoscale object—a tiny mechanical silicon beam—such that laser light of a carefully selected frequency can enter the system and, once reflected, can carry thermal energy away, cooling the system.

By carefully designing each element of the beam as well as a patterned silicon shield that isolates it from the environment, Painter and colleagues were able to use the laser cooling technique to bring the system down to the quantum ground state, where mechanical vibrations are at an absolute minimum. Such a cold mechanical object could help detect very small forces or masses, whose presence would normally be masked by the noisy thermal vibrations of the sensor.

"In many ways, the experiment we've done provides a starting point for the really interesting quantum-mechanical experiments one wants to do," Painter says. For example, scientists would like to show that a mechanical system could be coaxed into a quantum superposition—a bizarre quantum state in which a physical system can exist in more than one position at once. But they need a system at the quantum ground state to begin such experiments.

To reach the ground state, Painter's group had to cool its mechanical beam to a temperature below 100 millikelvin (-273.15°C). That's because the beam is designed to vibrate at gigahertz frequencies (corresponding to a billion cycles per second)—a range where a large number of phonons are present at room temperature. Phonons are the most basic units of vibration just as the most basic units or packets of light are called photons. All of the phonons in a system have to be removed to cool it to the ground state.

Conventional means of cryogenically cooling to such temperatures exist but require expensive and, in some cases, impractical equipment. There's also the problem of figuring out how to measure such a cold mechanical system. To solve both problems, the Caltech team used a different cooling strategy.

"What we've done is used the photons—the light field—to extract phonons from the system," says Jasper Chan, lead author of the new paper and a graduate student in Painter's group. To do so, the researchers drilled tiny holes at precise locations in their mechanical beam so that when they directed laser light of a particular frequency down the length of the beam, the holes acted as mirrors, trapping the light in a cavity and causing it to interact strongly with the mechanical vibrations of the beam.

The Caltech team isn't the first to cool a nanomechanical object to the quantum ground state; a group led by former Caltech postdoctoral scholar Andrew Cleland, now at the University of California, Santa Barbara, accomplished this in 2010 using more conventional refrigeration techniques, and, earlier this year, a group from the National Institute of Standards and Technology in Boulder, Colorado, cooled an object to the ground state using microwave radiation. The new work, however, is the first in which a nanomechanical object has been put into the ground state using optical light.

"This is an exciting development because there are so many established techniques for manipulating and measuring the quantum properties of systems using optics," Painter says.

Along with Painter and Chan, additional coauthors of the paper, "Laser cooling of a nanomechanical oscillator into its quantum ground state," include Caltech postdoctoral scholar T.P. Mayer Alegre and graduate students Amir Safavi-Naeini, Jeff Hill, and Alex Krause, along with postdoctoral scholar Simon Gröblacher and Markus Aspelmeyer of the Vienna Center for Quantum Science and Technology. The work was supported by Caltech's Kavli Nanoscience Institute; the Defense Advanced Research Projects Agency's Microsystems Technology Office through a grant from the Air Force Office of Scientific Research; the European Commission; the European Research Council; and the Austrian Science Fund.