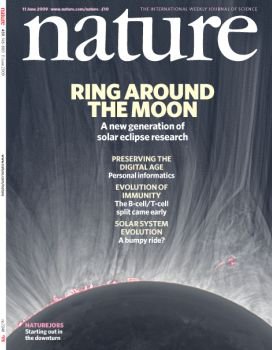 The June 11 issue of Nature features solar eclipse research--and an image of an eclipse--on its cover. Credit: Nature

PASADENA, Calif.-Championing the modern-day use of solar eclipses to solve a set of modern problems is the goal of a review article written by Jay Pasachoff, visiting associate at the California Institute of Technology (Caltech) and Field Memorial Professor of Astronomy at Williams College. The review is the cover story of the June 11 issue of Nature, as part of its coverage of the International Year of Astronomy.

Pasachoff's review article describes the history of eclipse discoveries, as well as current themes in eclipse research. "In the article, I try to show how there is still a vital role for eclipses in the range of observations we want to make of the sun," he says.

While space-based telescopes provide "wonderful" data for astronomers to examine, there are still observations that are "inaccessible from space," Pasachoff points out. "[I]t appears that for decades ground-based capabilities will still allow unique observations to be made from Earth rather than from space," he writes in his review.

Indeed, viewing an eclipse from the ground provides "the flexibility to use the latest equipment and to take advantage of new theoretical ideas to frame observations," he notes.

Despite the novelty of these approaches, Pasachoff says, "Many people still have an old-fashioned view of eclipses going back to the discovery of helium or the use of the eclipse 90 years ago this month for verifying Einstein's general theory of relativity. But those are old problems. These days there are a whole series of new questions and new methods that we can apply at eclipses."

Scientists will get their chance to ask those questions and use those methods next month, Pasachoff says, during what will be the longest solar eclipse in the 21st century. The upcoming total eclipse-which will be visible in China and India on July 22 for almost six minutes, "an unusually long time for a totality"-will allow Pasachoff's team, as well as many other teams of scientists, to make important observations that are expected to advance our understanding of the solar atmosphere.

Pasachoff will view the eclipse-his 49th such event-from a 3,000-foot-high mountain in Tianhuangping, China, along with a group of colleagues and students from Williams College. There, he will gather data to continue his research into the heating of the solar corona, which has a temperature of millions of degrees. "We'll be looking for waves in the corona," he says, "for vibrations in the corona that are a sign of these particular waves in the magnetic field that are heating the corona."

The study of eclipses, Pasachoff says, has been enhanced by advances in computer imaging that make it possible to "bring out" low-contrast features. Just such an image-computer-processed by Pasachoff's colleague, Miloslav Druckmüller of the Brno University in the Czech Republic-was chosen by Nature for the cover of the issue containing Pasachoff's review article. Pasachoff and Druckmüller have been collaborating on interpreting these images.

For these and many other reasons, Pasachoff says, the ground-based study of solar eclipses will continue to provide insights and observations of the sun that would otherwise be unobtainable. As he notes in his Nature review article, "At present the paired science and beauty of solar eclipses remain uniquely available to scientists and others in the path of totality."

Pasachoff's expedition to China will be supported by the National Geographic Society. His eclipse research has been supported by the Committee for Research and Exploration of the National Geographic Society, the National Science Foundation, NASA, and Williams College. NASA's Planetary Sciences Division has also provided the electronic cameras that Pasachoff's team uses both in his eclipse studies and in his studies of Pluto and other outer-solar-system objects, in which he has collaborated with Mike Brown, Caltech's Richard and Barbara Rosenberg Professor and professor of planetary astronomy.