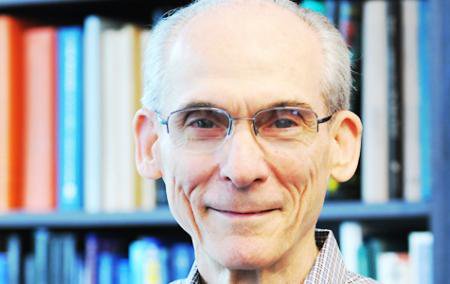 Zipping through the cosmos for 34 years and counting, the two Voyager spacecraft have been the quintessential mission of inspiration and discovery, having revealed new alien worlds and revolutionized our view of the solar system. As the mission's project scientist since 1972, Caltech's Ed Stone has been with Voyager since the beginning, and like the robot explorers, which are now venturing into interstellar space, he's still going and going.

In a front-page story that ran on April 14, The Los Angeles Times profiled Stone, who's the David Morrisroe Professor of Physics and was the director of JPL from 1991 to 2001. The article recounts Voyager's three-plus decades of exploration, returning dazzling, unprecedented images of Saturn's rings, Jupiter's swirling clouds, breathtaking moons, and the never-before-seen worlds of Neptune and Uranus (Voyager 2 is still the only spacecraft to have visited them):

"What a journey, what a thrill," Stone says, sitting at his spotless, unadorned desk. "It seemed like everywhere we looked, as we encountered those planets and their moons, we were surprised.

"We were finding things we never imagined, gaining a clearer understanding of the environment Earth was part of. I can close my eyes and still remember every part of it."

But of course, as the Voyagers will soon be the first to determine the outer boundary of the solar system and measure the conditions of interstellar space, the mission isn't finished yet. And neither is Stone.