The Case of the 'Missing Link' Neutron Star 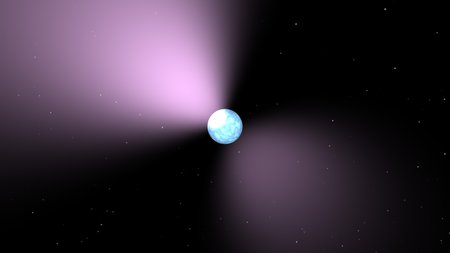 This artist's concept shows a pulsar, which is like a lighthouse, as its light appears in regular pulses as it rotates. Credit: NASA/JPL-Caltech
Tags:
astronomy & physics

Like anthropologists piecing together the human family tree, astronomers have found that a misfit "skeleton" of a star may link two different kinds of stellar remains. The mysterious object, called PSR J1119-6127, has been caught behaving like two distinct objects—a radio pulsar and a magnetar—and could be important to understanding their evolution.

A radio pulsar is type of a neutron star—the extremely dense remnant of an exploded star—that emits radio waves in predictable pulses due to its fast rotation. Magnetars, by contrast, are rabble rousers: They have violent, high-energy outbursts of X-ray and gamma ray light, and their magnetic fields are the strongest known in the universe.

The new study, led by astrophysicist Walid Majid of NASA's Jet Propulsion Laboratory (JPL), combined with other observations of the object, suggests that PSR J1119-6127 could be in a never-before-seen transition state between radio pulsar and magnetar.

"Our recent observations show that this object contains a bit of the 'astrophysical DNA' of two different families of neutron stars," says professor of physics Tom Prince, director of the W. M. Keck Institute for Space Studies at Caltech. "We are looking forward to finding other examples of this type of transitional object." Prince is co-author of a new study published in the Jan. 1 issue of Astrophysical Journal Letters, and was presented this week at the American Astronomical Society meeting in Grapevine, Texas. Other Caltech authors of the study include co-lead author Aaron Pearlman, a graduate student, and Jonas Lippuner, a former graduate student now at Los Alamos National Laboratory.

The Jet Propulsion Laboratory (JPL) is managed by Caltech for NASA.