Caltech screens "The Farthest—Voyager in Space" at Beckman Auditorium 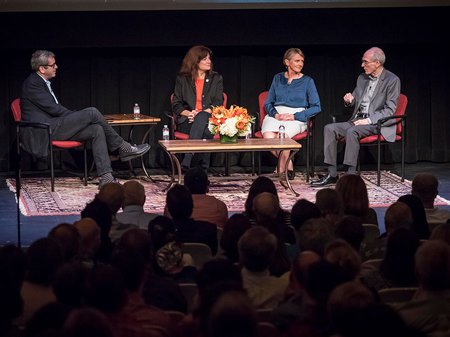 In about 10 years, the twin Voyager spacecraft will go silent. Their plutonium-powered radioisotope thermoelectric generators, which are slowly losing power at a rate of four watts per year, will finally no longer be able to power the equipment needed to transmit messages back to Earth.

Having already given us a tour of the outer solar system, they will continue hurtling deeper into space—each carrying a copy of a golden record that contains a metaphorical message in a bottle from the people of Earth to any intelligent beings who may someday find it.

But with no way to send messages, the probes' last connection to the earth—and to the scientists and engineers who created them decades ago and have cared for them over the long years since—will be severed.

One might expect that to be a source of sadness for Ed Stone, who has led the Voyager project for the past four decades. But when asked about it at a celebration of the 40th anniversary of the Voyager spacecraft held July 29 in Caltech's Beckman Auditorium, Stone, Voyager project scientist for JPL and Caltech's David Morrisroe Professor of Physics, expressed only gratitude.

"I think the mission has been so overwhelmingly good that you can't complain. After all, this is a 40-year mission of discovery already, and we have, maybe, up to 10 years more. And it would have been a great mission with half of that. I'm not going to be sad in that sense at all," he said.

At the event, Caltech hosted a screening of The Farthest—Voyager in Space, which tells the story of the Voyager mission and its journey to the outer planets and beyond. The documentary was produced by Tangled Bank Studios, the film production company founded by Howard Hughes Medical Institute as an extension of its science and education mission.

Launched in 1977, the Voyager spacecraft took advantage of a rare alignment of the outer planets that allowed the spacecraft to slingshot from one world to the next, picking up speed at each planet. Voyager 1 conducted flybys of Jupiter and Saturn, while Voyager 2 flew by Jupiter, Saturn, Uranus, and Neptune.

The program gathered data and images from the outer planets that revolutionized our understanding of the solar system—and each craft has continued to sail away from the earth bearing greetings, music, and images from humanity that have been preserved on two golden records. The Farthest explores the mission itself, from the highest highs—like the discovery of Jupiter's rings and of active volcanism on other bodies in the solar system—to the lowest lows, like the moment that Voyager 2's camera platform jammed while passing Saturn, temporarily crippling the spacecraft's ability to make scientific observations.

After the screening, Stone participated in a panel discussion about Voyager with Carolyn Porco (PhD '83), of the Space Science Institute and Voyager 1 imaging specialist and imaging science team leader for the Cassini-Huygens mission; and Suzanne Dodd (BS '84), Voyager project manager and JPL's director for the Interplanetary Network Directorate. The discussion was moderated by science journalist Miles O'Brien.

Porco, who joined the mission in the 1980s, described the thrill of being a part of the fast-paced action at JPL during planetary flybys. "I had this incredible sense of privilege that I was one of the people who was a part of this," she said. "It was like someone dragged me by the hand and took me off on the most incredible journey and adventure that humanity had ever undertaken."

Porco described the mission as the "Apollo 11 of planetary exploration," ascribing it with the same impact as the mission that first landed humans on the moon. Dodd echoed her sentiment, pointing out that Voyager paved the way for future probes to the outer solar system.

"I always like to describe the Voyagers as the grandparents of planetary exploration. You've got the two Voyager spacecraft followed up by the children: Galileo at Jupiter and Cassini at Saturn, and pretty soon we're going to have grandchildren with the Europa mission," Dodd said. (Juno, which reached Jupiter's orbit in 2016, would also qualify as a "grandchild" of Voyager, Stone noted.)

Dodd's mention of the Europa mission, which will send a probe to Jupiter's icy moon, drew a question from an audience member about the schedule and plans for that future exploration.

Her response: "You should ask the gentleman who's on your right. ..."

The gentleman in question was Mike Watkins, director of JPL, who briefly stepped up to the microphone next to the audience member to praise the Voyager team and discuss the Europa mission.

"I'm here in the audience, just like you guys are, marveling at these folks on stage and what happened when I was 10 years old," Watkins said. "Those images from the Jupiter and Saturn flybys are part of why I went into what I did in grad school." Watkins went on to describe plans for the Europa Clipper, which will be launched in the 2020s and conduct flybys of the moon, as well as the potential for a Europa lander at a future date. Interest in Europa is high because beneath the moon's icy crust is a vast ocean of water—one of the prerequisites for life as we know it.

Eventually, the conversation turned to the topic of the golden record—the "nonscientific" part of Voyager but the one that arguably has generated the most public interest. Regardless of whether intelligent life is out there or could ever even find the Voyager spacecraft someday, the important thing is that humanity was able to send Voyager at all, Stone said.

The Farthest—Voyager in Space will premiere on Wednesday, August 23 at 9 p.m. ET on PBS.