'City of Astronomy' to Host Gathering of International Space Experts 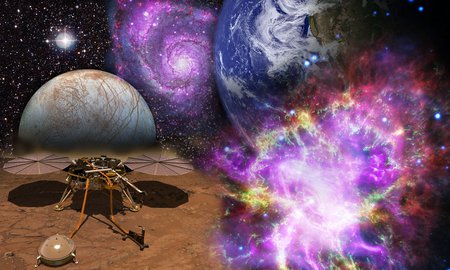 From July 14 to 22, the world's leading experts in space science will gather in Pasadena, informally known as the City of Astronomy, for the 42nd assembly of the Committee on Space Research, or COSPAR. Caltech is hosting the meeting, with the support of the Jet Propulsion Laboratory, which is managed by Caltech for NASA.

"We call Pasadena the City of Astronomy because it's home to many astronomy institutions, such as Caltech and JPL, the Carnegie Observatories and Mount Wilson and more," says Thomas (Tom) Prince, the Ira S. Bowen Professor of Physics at Caltech and chair of the scientific organizing committee for the COSPAR 2018 meeting. "It made sense that Pasadena would host the entire international community involved in space science and exploration."

Up to 2,500 participants are expected at the meeting, taking place at the Pasadena Convention Center and the Hilton Pasadena.

The meeting will feature talks, roundtable discussions, and exhibits on a wide range of space science subjects, including icy worlds in our solar system, such as Jupiter's moon Europa; the search for life beyond Earth; upcoming space telescopes; Earth climate science; exoplanets; and more. Prince says that the European Space Agency's Gaia mission, which recently released a three-dimensional map containing more than one billion stars in our Milky Way galaxy, will be a hot topic.

"Even though the topic is space science, the atmosphere is very much down to Earth," says Prince. "It's a place for people to get together and collaborate."

"COSPAR was created by the United Nations Committee on Peaceful Uses of Outer Space, at the dawn of the space age and height of the Cold War, specifically to facilitate exchanges between scientists in the U.S. and former USSR," says Gregg Vane, a senior strategist for solar system exploration at JPL and chair of the local organizing committee for COSPAR 2018. "Today, COSPAR is the primary means for facilitating communications between space scientists across the globe."

At the same time as the COSPAR meeting, Pasadena will host AstroFest 2018—a week-long series of space-themed events and activities for the public. AstroFest 2018 kicks off July 14 at the Pasadena Convention Center with exhibits, planetarium shows, and evening stargazing. Activities later in the week include Astronomy on Tap, an informal evening at a local pub, where astronomers and the public discuss everything from black holes to bratwurst. A full list of events is online at cityofastronomy.org.

"We all share the same sky and its cosmic treasures, and the occasion of COSPAR provides an opportunity for the City of Astronomy partnership to share those wonders with the public during AstroFest," says Janice Lee, an astronomer at IPAC, Caltech's science and data center for astronomy, and chair of AstroFest 2018.

COSPAR is celebrating its 60th anniversary this year. It was founded in 1958—the same year the U.S. launched the Explorer 1 spacecraft, a research satellite built and operated by JPL. The goal of COSPAR is to exchange results, information, and opinions in space research, primarily through its biennial meetings. The last meeting, scheduled to take place in Istanbul in 2016, did not occur due to political unrest and an attempted coup. The upcoming Pasadena meeting is therefore the first to happen in four years. JPL senior research scientist Rosaly Lopes is deputy chair of the scientific program committee for 2018 and David Imel, manager of Caltech's IPAC astronomy center, is co-chair of the local organizing committee.

More information about COSPAR can be found online at cospar2018.org.