The Dance of Jupiter's Moons 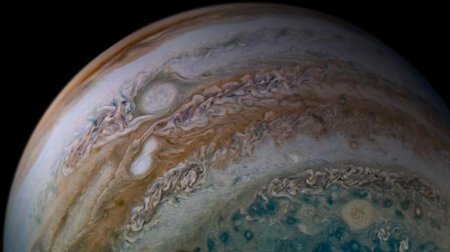 Four hundred years ago, the astronomer Galileo Galilei announced his discovery of four moons orbiting around the planet Jupiter, each seen as a distinct white dot through his telescope. However, only in the span of the last four decades have astronomers been able to study the Jovian moons in detail to reveal that the four—Io, Europa, Ganymede, and Callisto—are fascinating worlds of their own.

Though they are all of similar sizes—about one fourth of Earth's radius—the four moons are diverse: Io is violently volcanic, Europa is encrusted in ice, Ganymede has a magnetic field, and Callisto is pockmarked with ancient craters. Moreover, icy Europa is considered a strong candidate for hosting life in the solar system.

One open question still puzzles planetary scientists: How did the Jovian satellites form?

Now, Caltech professor of planetary science Konstantin Batygin (MS '10, PhD '12) and his collaborator Alessandro Morbidelli of Observatoire de la Côte d'Azur in France have proposed an answer to this longstanding question. Using analytical calculations and large-scale computer simulations, they propose a new theory of the Jovian satellites' origins. The research is described in a paper appearing in the May 18 issue of The Astrophysical Journal.

During the first few million years of our sun's lifetime, it was surrounded by a protoplanetary disk made up of gas and dust. Jupiter coalesced from this disk and became encircled by its own disk of satellite-building material. This so-called circum-Jovian disk was fed by material from the protoplanetary disk that rained down on Jupiter at the planet's poles and flowed back out of Jupiter's sphere of gravitational influence along the planet's equatorial plane. But this is where things get tricky for satellite formation; how did this ever-changing disk accumulate enough material to form moons?

Batygin and Morbidelli's new model addresses this by incorporating the physics of interactions between dust and gas in the circum-Jovian disk. In particular, the researchers demonstrate that for icy dust grains of a specific size-range, the force dragging them toward Jupiter and the force (entrainment) carrying them in the outward flow of the gas cancel each other perfectly, allowing the disk to act like a giant dust trap. Batygin says the inspiration for the idea came when he was out for a run.

"I was running up a hill, and saw that there was a bottle on the ground that was not rolling down the hill because wind coming from behind me was pushing it upward and holding it in equilibrium with gravity," he says. "A simple analogy came to mind: if a beer bottle rolling down an inclined plane is akin to orbital decay of solid grains due to hydrodynamic drag, then particles of a certain size-range must find an equivalent balance in orbit of Jupiter!"

The researchers' model proposes that, due to this balance between inward drag and outward entrainment, the disk around Jupiter became rich in icy dust grains, each about one millimeter in size. Eventually, this ring of dust became so massive that it collapsed under its own weight into thousands of "satellitesimals"—icy asteroid-like objects about 100 km across. Over thousands of years, satellitesimals coalesced into moons, one at a time.

According to the model, as the first moon (Io) formed and its mass reached a certain threshold, its gravitational influence began to raise waves in the gaseous disk of material that surrounded Jupiter. By interacting with these waves, the moon migrated toward Jupiter until it reached the inner edge of the circum-Jovian disk, close to its present orbit. The process then began again with the next moon.

This sequential process of formation and inward migration led Io, Europa, and Ganymede to lock into an orbital resonance—a configuration where for every four times Io goes around Jupiter, Europa goes around twice and Ganymede goes around once. This so-called Laplace resonance is one of the most striking and well-known features of the moons' orbits.

Finally, the model suggests that radiation from the sun eventually blew away the remaining gas in the disk around Jupiter, leaving behind the residual satellitesimals that then formed the fourth and final major moon, Callisto. However, with no gas left to drive long-range migration, Callisto could not join the other moons in resonance, and was left stranded to revolve around Jupiter every two weeks.

"The process we described for the formation of the satellites of Jupiter may be a general one," says Morbidelli. "We now have observations of the disk around one extrasolar giant planet, PDS70c, and it looks extraordinarily rich in dust, like we envision for the disk of Jupiter before the formation of its satellites."

There is still much to discover about the Jovian moons. NASA's Europa Clipper mission, launching in 2024, will visit Europa with the aim of discovering whether or not it has conditions amenable to life. The European Space Agency also plans to send a mission, called JUpiter ICy moons Explorer (JUICE), focusing on Ganymede, the largest of the Jovian moons.

The paper is titled "Formation of Giant Planet Satellites." The research was supported by the David and Lucile Packard Foundation, the Alfred P. Sloan Foundation, and Observatoire de la Côte d'Azur.