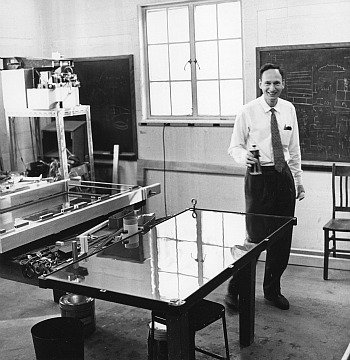 Bud Cowan with one of his cloud chambers, circa 1959. Credit: Courtesy of the Cowan Family
Tags:
obituary

PASADENA, Calif.—Eugene W. "Bud" Cowan, professor of physics, emeritus, at the California Institute of Technology (Caltech), passed away November 4 in Menlo Park, California. He was 90.

Cowan's research interests included investigations of high-energy interactions of cosmic rays, air-pollution studies, and studies of the earth's magnetism. He was noted for perfecting a cloud chamber capable of operating on a continuous basis. All cloud chambers depend on the condensation of a vapor on the charged ions left by the passage of a speeding particle. Previous cloud chambers had required a sudden, large drop in chamber pressure for condensation to occur, and this had to be followed by a rest period during which no observations could be made. Cowan's innovation eliminated the need for the pressure decrease and thus eliminated the rest period.

Cowan was particularly proud of his work in the early 1950s on the Xi "cascade" particle, the first doubly strange baryon. His cloud-chamber image clearly confirmed the existence of the particle and provided important input that led to the subsequent development of the quark model. His later work focused on the dynamics of the mechanism that generates the earth's magnetic field.

Long recognized for the quality of his teaching, Cowan received the 1986 Associated Students of the California Institute of Technology (ASCIT) Award for Teaching Excellence for his course on classical electromagnetism.

Cowan was born in 1920 in Ree Heights, South Dakota. After receiving his BS at the University of Missouri and his SM at MIT, where he was an instructor in the radar school and at the Radiation Laboratory, he came to Caltech in 1945. Cowan studied under cosmic-ray researcher and Nobel Laureate Carl Anderson. Awarded his PhD in 1948, Cowan became a research fellow in 1948, an assistant professor in 1950, and an associate professor in 1954. In 1961 he was promoted to professor of physics and became an emeritus professor in 1986.

Cowan was awarded four patents, including one for his innovative cloud chamber. He was a fellow of the American Physical Society.

In the Caltech community, Cowan was well known for his regular visits to the Caltech pool. "My father also walked the 2 1/2 miles to and from work for probably more than 50 years, and for much of that time also went daily to the Caltech pool and gym," says his son, Glen, a particle physicist at Royal Holloway, University of London. "His favorite hobby was hiking in the San Gabriel Mountains, and he was often one of the small group of hikers that walked to the physics picnic from the trail head in Sierra Madre. My father truly enjoyed being part of the Caltech community. I believe he was there almost every day from 1945 to 2008. Maybe that's some kind of record."

In 2008, Cowan and his wife, Thelma, moved from Pasadena to Menlo Park, California, to be near their daughter,  Tina, a geneticist at Stanford University.