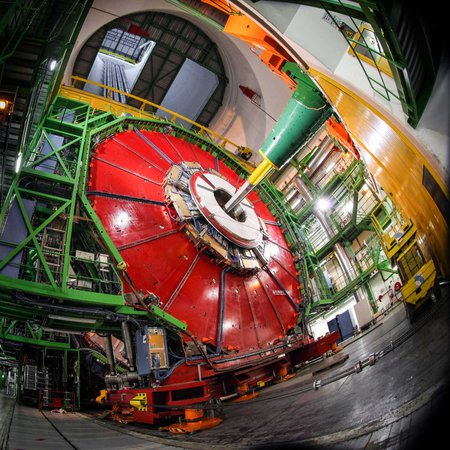 The Higgs boson reached overnight fame in 2012 when it was finally discovered in a jumble of other particles generated at CERN's Large Hadron Collider (LHC) in Geneva, Switzerland. The discovery was monumental because the Higgs boson, which had only been theorized about previously, has the special property of endowing other elementary particles with mass. It is also exceedingly rare and difficult to identify in the debris of colliding particles.

Caltech physicists played a major role in the Higgs boson discovery, a result that earned theoretical physicist Peter Higgs a share of the 2013 Nobel Prize in Physics, and now they continue to make significant findings about rare Higgs boson processes.

This summer, for the first time, particle physicists using data collected by the experiment known as the Compact Muon Solenoid (CMS) at the LHC, have found evidence that the Higgs boson decays into a pair of elementary particles called muons. The muon is a heavier version of the electron, and both muons and electrons belong to a class of particles known as fermions, as described in the widely accepted model of particles called the Standard Model. The Standard Model classifies all particles as either fermions or bosons. Generally, fermions are building blocks of all matter, and bosons are the force carriers.

In addition, this result provides further evidence that the decay rate of the Higgs to fermion pairs is proportional to the square of the mass of the fermion. This is a key prediction of the Higgs theory. With more data, the LHC experiments are expected to confirm that indeed the Higgs gives the fundamental particles their mass.

"The importance of this measurement is that we are probing rare processes involving the Higgs boson, and we are in the precision Higgs physics investigation regime where any departure from the Standard Model predictions can point us to new physics," says Maria Spiropulu, the Shang-Yi Ch'en Professor of Physics at Caltech.

Scientists analyzing data from another instrument at the LHC, known as ATLAS (A Toroidal LHC ApparatuS), also found corroborating evidence for the Higgs boson decaying into muons. The results from both experiments were presented at the 40th International Conference on High Energy Physics in August 2020.

"We need more data and clever analysis methods to confirm our results, but this is the first time we are seeing evidence that the Higgs boson decays into two muons," says Irene Dutta (MS '20), a Caltech CMS team member and graduate student in Spiropulu's laboratory. "This result validates experimentally that the predictions of the Standard Model of particle physics are spot-on. Even a small deviation from our model would tell us something else is going on, but so far the Standard Model remains firm," says Dutta.

The finding will ultimately help scientists better understand how the Higgs boson endows mass to the fermions. The Higgs boson can be thought of as the jiggling or excitation of the Higgs field. The Higgs field acts like a thick syrup and as particles move through it, they acquire mass; the slower the particles move through the field, the heavier they are (see video for a metaphorical illustration of the concept).

"We want to understand the origin of mass in our universe," says Caltech CMS team member Nan Lu, a postdoctoral scholar in Spiropulu's laboratory. "The Higgs boson is an experimental tool for understanding this mechanism, and could be a handle for discovering new physics. We can't systematically observe the Higgs boson or other elementary particles, except in their manifestation in high-energy particle collisions, but they are the basic building blocks of our universe," says Lu.

The Caltech team contributed to the new finding by searching for Higgs bosons produced by a particular mechanism in which two particles called quarks are also generated at the same time (quarks are another type of fermion). This process is of special interest because the two quarks offer distinct signatures to help identify the Higgs bosons. Lu developed the method to probe the sensitivity of the CMS search for different masses of the Higgs boson, thereby improving the confidence of the findings. Dutta worked on demonstrating the power of an advanced artificial-intelligence (AI) methodology tool, known as a deep neural network, for analyzing the LHC data.

Both Dutta and Lu helped to derive the final sensitivity results. Former Caltech postdoctoral scholar Joosep Pata, who is now on the faculty of the National Institute of Chemical Physics and Biophysics in Estonia, developed novel methods for speeding up the complex computational analysis used in the project.

"Probing the properties of the Higgs boson is tantamount to searching for new physics that we know has to be there" said Spiropulu. "I am especially proud of the work by Nan, Irene, Joosep, and the entire Caltech CMS group, whose talent, diversity, and results shine in the landscape of a grand international collaboration."

Read more about this result from Caltech's High Energy Physics group, CERN, and CMS. More information about the Higgs boson can be found at Physics Today.