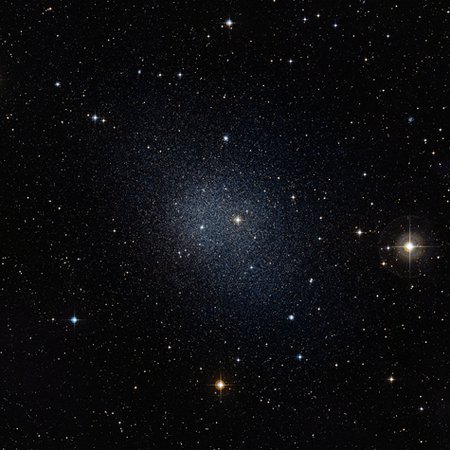 This dwarf spheroidal galaxy in the constellation Fornax is a satellite of our Milky Way and is one of 10 used in Fermi's dark matter search. The motions of the galaxy's stars indicate that it is embedded in a massive halo of dark matter. Credit: ESO/Digital Sky Survey 2
Tags:
astronomy & physics

Scientists have further narrowed the search for a hypothetical particle that could be dark matter, the mysterious stuff that makes up 80 percent of all the mass in the universe. Caltech postdoc Jennifer Siegal-Gaskins presented the researchers' results, compiled from two years' worth of data from NASA's Fermi Gamma-ray Space Telescope, at a meeting of the American Physical Society in Atlanta earlier this week.

Gamma rays are very energetic light, and the telescope looks for faint gamma-ray signals that are generated by a variety of sources, such as gas and dust spiraling into supermassive black holes or exploding stars. But another potential source of gamma rays is dark matter. Although no one is sure what dark matter is, one of the leading candidates is a yet-to-be-discovered particle called a weakly interacting massive particle (WIMP). When two of these WIMPs meet, the theory goes, they can annihilate one another and generate gamma rays.

There are many possible versions of WIMPs, and they're expected to span a wide range of masses, producing a range of gamma rays with different energies. Using Fermi, the scientists focused on 10 small galaxies that orbit the Milky Way, searching for gamma-ray signals within a specific range of energies. They found no signs of annihilating WIMPs, which rules out certain kinds of WIMPs as dark-matter candidates.

To read more and to watch videos explaining the results, click here.