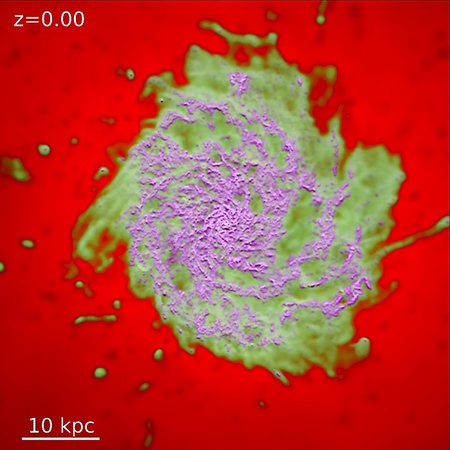 A still image from the FIRE simulation videos, showing the gases in a galaxy. Magenta is cold molecular/atomic gas, which forms stars; green is warm ionized gas, most of which cools into a galaxy; red is 'hot' gas, which makes up the galaxy halo. Credit: Philip Hopkins/Caltech
Tags:
astronomy & physics

For decades, astrophysicists have encountered a puzzling contradiction: although many galactic-wind models—simulations of how matter is distributed in our universe—predict that the majority of the "normal" matter exists in stars at the center of galaxies, in actuality these stars account for less than 10 percent of the matter in the universe. A new set of simulations offer insight into this mismatch between the models and reality: the energy released by individual stars within galaxies can have a substantial effect on where matter is located in the universe.

The Feedback in Realistic Environments, or FIRE, project is the culmination of a multiyear, multiuniversity effort that—for the first time—simulates the evolution of galaxies from shortly after the Big Bang through today. The first simulation to factor in the realistic effects of stars on their galaxies, FIRE results suggest that the radiation from stars is powerful enough to push matter out of galaxies. And this push is enough to account for the "missing" galactic mass in previous calculations, says Philip Hopkins, assistant professor of theoretical astrophysics at the California Institute of Technology (Caltech) and lead author of a paper resulting from the project.

"People have guessed for a long time that the 'missing physics' in these models was what we call feedback from stars," Hopkins says. "When stars form, they should have a dramatic impact on the galaxies in which they arise, through the radiation they emit, the winds they blow off of their surfaces, and their explosions as supernovae. Previously, it has not been possible to directly follow any of these processes within a galaxy, so the earlier models simply estimated—indirectly—the impact of these effects."

By incorporating the data of individual stars into whole-galaxy models, Hopkins and his colleagues can look at the actual effects of star feedback—how radiation from stars "pushes" on galactic matter—in each of the galaxies they study. With new and improved computer codes, Hopkins and his colleagues can now focus their model on specific galaxies, using what are called zoom-in simulations. "Zoom-in simulations allow you to 'cut out' and study just the region of the universe—a few million light-years across, for example—around what's going to become the galaxy you care about," he says. "It would be crazy expensive to run simulations of the entire universe—about 50 billion light-years across—all at once, so you just pick one galaxy at a time, and you concentrate all of your resolution there."

A zoomed-in view of evolving stars within galaxies allows the researchers to see the radiation from stars and supernovae explosions blowing large amounts of material out of those galaxies. When they calculate the amount of matter lost from the galaxies during these events, that feedback from stars in the simulation accurately accounts for the low masses that have been actually observed in real galaxies. "The big thing that we are able to explain is that real galaxies are much less massive than they would be if these feedback processes weren't operating," he says. "So if you care about the structure of a galaxy, you really need to care about star formation and supernovae—and the effect of their feedback on the galaxy."

But once stars push this matter out of the galaxy, where does it go?

That's a good question, Hopkins says—and one that the researchers hope to answer by combining their simulations with new observations in the coming months.

"Stars and supernovae seem to produce these galactic superwinds that blow material out into what we call the circum- and intergalactic medium—the space around and between galaxies. It's really timely for us because there are a lot of new observations of the gas in this intergalactic medium right now, many of them coming from Caltech," Hopkins says. "For example, people have recently found that there are more heavy elements floating around a couple hundred thousand light-years away from a galaxy than are actually inside the galaxy itself. You can track the lost matter by finding these heavy elements; we know they are only made in the fusion in stars, so they had to be inside a galaxy at some point. This fits in with our picture and we can now actually start to map out where this stuff is going."

Although the FIRE simulations can accurately account for the low mass of small- to average-size galaxies, the physics included, as in previous models, can't explain all of the missing mass in very large galaxies—like those larger than our Milky Way. Hopkins and his colleagues have hypothesized that black holes at the centers of these large galaxies might release enough energy to push out the rest of the matter not blown out by stars. "The next step for the simulations is accounting for the energy from black holes that we've mostly ignored for now," he says.

The information provided by the FIRE simulations shows that feedback from stars can alter the growth and history of galaxies in a much more dramatic way than anyone had previously anticipated, Hopkins says. "We've just begun to explore these new surprises, but we hope that these new tools will enable us to study a whole host of open questions in the field."

These results were submitted to the Monthly Notices of the Royal Astronomical Society on November 8, 2013 in a paper titled "Galaxies on FIRE (Feedback In Realistic Environments): Stellar Feedback Explains Cosmologically Inefficient Star Formation." In addition to Hopkins, other authors on the paper include Duìan Kereì, UC San Diego; José Oñorbe and James S. Bullock, UC Irvine; Claude-André Faucher-Giguère, Northwestern University; Eliot Quataert, UC Berkeley; and Norman Murray, the Canadian Institute for Theoretical Astrophysics. Hopkins's work was funded by the National Science Foundation and a NASA Einstein Postdoctoral Fellowship, as well as the Gordon and Betty Moore Foundation.