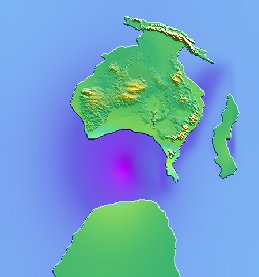 PASADENA--The theory of plate tectonics says that Earth's crust has moved horizontally by thousands of miles over millions of years. For visual evidence, one need look no further than a map showing how nicely South America and Africa fit together.

But plate tectonics also literally has its ups and downs. In addition to the horizontal motions that long ago tore South America and Africa asunder, plate tectonics can also cause entire land masses to steadily rise and lower by thousands of feet. These vertical motions are driven by the internal planetary heat engine that makes the plates slide around horizontally.

One of the best examples of this vertical motion is Australia, and researchers have now completed a three-dimensional model of Earth's internal heat engine that provides the best-ever description of the process. The research is published in the current issue of Science.

According to Caltech geophysicist Michael Gurnis, the lead author of the paper, the research is aimed at improving the understanding of how heat convection in the mantle relates to the motions of the crustal plates. More specifically, the work answers nagging questions about oddities in the Australian plate.

"Normally, the ridges you see in the ocean floor are associated with upwellings of hot material from the mantle," Gurnis says. But in the ocean between Australia and Antarctica, researchers have long noted a downwelling at this mid-ocean ridge.

Also, Gurnis explains, there is longstanding evidence that Australia's seacoast significantly retreated during the Cretaceous period (about 60 to 125 million years ago). This was caused by the aforementioned vertical tectonic motions, which bowed the entire continent upward.

The result was a continent with terrain that at times was well above sea level—and thus dry—but at other times relatively low and thus inundated with water.

For example, the maximum flooding of Australia occurred about 120 million years ago and covered more than half the present land mass with water. But what has long perplexed geologists was that 70 million years ago, while nearly half the surface area of other continents (including the Americas, Europe, and Russia) was covered by shallow inland seas, Australia was high and dry!

The achievement of Gurnis and his colleagues is to model these risings and fallings of continents very precisely, so that a vertical level can be "predicted" for a certain time period.

Also, their dynamic models show that the entire effect was caused by a plate that subducted (or passed under) Australia, later stagnated in the mantle hundreds of miles below Earth's surface, and is now being drawn back up by the South East Indian Ridge.

"This is one of the best examples of this process, which is called 'continental epeirogeny,'" Gurnis says. "As such, it is an ideal place for tying vertical motion to how Earth's heat engine works."

The dynamic models published by Gurnis and his colleagues predict a downwelling between Australia and Antarctica in precisely the position it is observed. "The correspondence between sea-floor topography, chemistry, and crustal thickness is impressive," says Gurnis.

The work represents a breakthrough because of the ability to predict the timing and geography of geologic events separated widely in space and time. Gurnis suggests that this work opens up a huge new frontier in which the motions of plates can be predicted from computer models of the Earth's internal heat engine, in much the same way that scientists use sophisticated global circulation models to study climate change.

Says Gurnis, "Such models can be tested against the vast library of Earth's history locked in the geologic record within continents and on the sea floor."

The other authors of the paper are R. Dietmar Mueller of the University of Sydney in Australia and Louis Moresi of the Commonwealth Scientific and Industrial Research Organization in Perth, Australia.