Going Out in a Blaze of Glory: Cassini Mission Highlights

The November Watson Lecture will be given by Linda Spilker, Cassini project scientist. 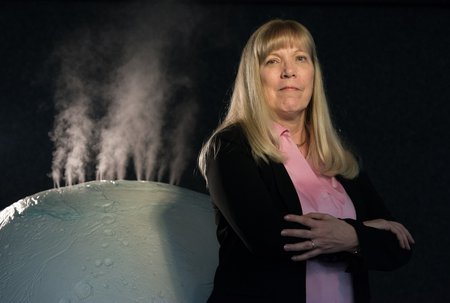 Early in the morning of September 15, the Cassini spacecraft sent its final signals to Earth and plunged into Saturn, burning up in its atmosphere. Cassini had been orbiting and observing the planet and its moons for the previous 13 years. On Wednesday, November 1, Cassini project scientist Linda Spilker of NASA's JPL, a division of Caltech, will give a Watson Lecture highlighting the Cassini mission's most intriguing discoveries. The lecture begins at 8 p.m. in Beckman Auditorium and is free to the public.

I am the Cassini project scientist. I am responsible for maximizing the scientific return of the mission within cost and schedule. I work with a team of over 300 international scientists to produce the best science possible for the mission across five diverse areas involving the planet, its magnetosphere, its rings, the moon Titan, and the icy satellites. I enjoy interacting with Cassini's scientists.

By studying the planets, we seek to answer some key questions about ourselves, including how the solar system come to be and if we are alone in the universe. The discoveries made by Cassini and Huygens [a probe carried into space by Cassini that landed on Saturn's moon Titan in 2005] have certainly expanded the possibility that there are other worlds where life might exist. For example, Saturn's tiny moon Enceladus has a salty, liquid water ocean beneath its icy crust, as does the giant moon Titan. Could life exist inside these ocean worlds?

I always enjoyed science, most especially studies of the stars and planets. My parents gave me my first telescope when I was nine years old. The first thing I did was to use it to look at Saturn, Jupiter, and their moons. I wondered what these worlds would look like up close. Working on both Cassini and Voyager gave me a chance to find out.

I majored in physics in college at Cal State Fullerton. When I got out of school in the late 1970s, it was a great time to look for a job. I applied at JPL—in fact, JPL was number one on my list as I had always wanted to do something in astronomy or on the planets. I was offered two jobs—one on the Viking extended mission, and one on a new mission called Voyager that hadn't even launched yet. I asked where Voyager was going. They said, "Jupiter and Saturn and, if all goes well, on to Uranus and Neptune." So of course I chose Voyager—that was a no-brainer. I was just launching my career and it seemed appropriate to start with something new. Using Voyager data, I got both master's and PhD degrees at UCLA. As Voyager was ending, I was asked to participate in a scientific study for a mission to return to Saturn. That mission ultimately became Cassini. Working on both Voyager and Cassini has been a dream come true.