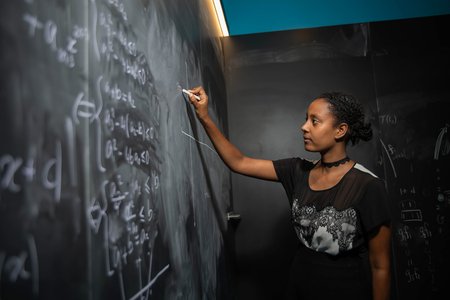 Summer student Mahlet Shiferaw has been busy studying the harmonics of gravitational waves—ripples in spacetime produced by cosmic events such as the collisions of black holes. These waves have been detected regularly by LIGO (Laser-Interferometer Gravitational-wave Observatory) since 2015. Shiferaw wants to know more about higher-order modes of gravitational waves, which are similar to musical overtones. In the same way that the overtones of a piano can sound different from those of a plucked violin string, these higher-order gravitational-wave modes can reveal unique information about their sources: black holes and other objects in space.

LIGO is only now becoming sensitive enough to detect these higher-order modes; it should be able to detect them more regularly in the coming years after planned upgrades to its instruments.

"My research will pave the way for future tests of the general theory of relativity under extreme conditions—near black holes, where gravity is strong and the speeds of particles are close to that of light," she says. "It's mind-blowingly cool."

Shiferaw is a LIGO SURF student and Carl A. Rouse Memorial Fellow working with Professor of Physics Alan Weinstein this summer. SURF (Summer Undergraduate Research Fellowships) is a 10-week program that lets undergraduates hone their research skills across campus and at JPL; the LIGO SURF program is specifically tailored to LIGO.

Shiferaw will go back to Harvard University this fall and finish her undergraduate degree in astrophysics and physics. She says she will miss Caltech and the Pasadena sunshine. "The campus is so beautiful, sometimes it feels like walking around in a huge botanical garden," she says.

After graduating, she plans to earn her PhD in physics or astronomy and explore topics such as dark matter, dark energy, gravitation, and black holes.

Shiferaw is of Ethiopian descent, a fact of which she says she is proud. "Diversity in STEM is really important to me, and I always try to encourage more black girls to go into physics or astronomy." In her spare time, Shiferaw likes to draw and paint. You can check out some of her drawings on her Instagram account @lilypippili.