The spacecraft that just keep going and going 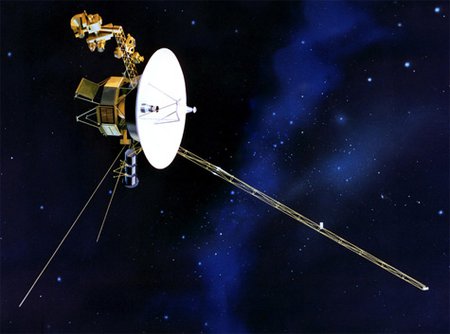 Today, September 5, marks the 35th anniversary of the launch of Voyager 1, which lifted off in 1977 on a Titan III–Centaur launch system just 16 days after its twin, Voyager 2. Now 11 billion and 9 billion miles from the sun, respectively, the spacecraft are the farthest-flung man-made objects, traveling every 100 days a distance equal to that between sun and Earth.

"We thought we could do this, but it is, in a certain sense, amazing," says Ed Stone, the mission's project scientist and the David Morrisroe Professor of Physics at Caltech. "After all, when the Voyagers were launched, the space age itself was only 20 years old."

Originally commissioned to last just four years, the Voyager mission created two identical spacecraft—with the hope that at least one would reach Jupiter and Saturn. As we now know, both Voyager spacecraft survived launch and the harsh radiation environment around Jupiter to relay close-up images and scientific measurements of the outer solar system's planets and their moons.

"There was much more out there to be discovered than we could have possibly imagined," says Andrew Ingersoll, an atmospheric scientist on the Voyager team and professor of planetary science at Caltech. "There were many heroes on the Voyager mission, but I like to say that the planets themselves were among those. The planets came through with amazing stuff."

Indeed, the Voyager spacecraft made a long list of discoveries on their tour of the outer planets. Some of Voyager 1's greatest hits include the finding that one of Jupiter's moons, Io, is home to eight active volcanoes spewing sulfur and oxygen, and that Saturn's largest moon, Titan, has a nitrogen atmosphere that lacks oxygen. For its part, Voyager 2 was the first spacecraft to visit and study Uranus and Neptune. At Uranus, it found that the planet's magnetic pole lies closer to the equator than the poles. And at Neptune, Voyager 2 found the fastest winds in the solar system.

"These are things we hadn't really thought about or imagined," Stone says. "With what I call our limited terracentric view, it was hard to realize how diverse nature really is. That's what Voyager revealed."

Today, the mission is officially known as the Voyager Interstellar Mission, acknowledging the fact that the robotic explorers are on a journey that is expected to one day take them out of our solar system and into interstellar space. When they will actually leave the sun's sphere of influence—an area called the heliosphere—no one can say, but mission scientists now say it appears to be only a matter of time before they do so. "But it could be several days, several weeks, or several years," Stone says.

Stone has served as the mission's project scientist since 1972. He describes Voyager as "a journey of a lifetime." These days, one of the first things he does every morning when he gets to his office in the Cahill Center for Astronomy and Astrophysics is to check the measurements of energetic particles detected by the Voyager 1 spacecraft. One of its instruments, the Cosmic Ray Subsystem, measures both high-energy particles that reach the spacecraft from outside the heliosphere and lower-energy particles that come from within the solar system. For the last seven years or so—since the spacecraft has been in a region known as the heliosheath—the number of lower-energy particles detected by Voyager 1's CRS has remained steady. Suddenly this past July, Stone says, that particle count dropped by about half, and then, after a few days, rose back up to normal. In August, Stone noticed the same odd phenomenon, but this time the number of particles decreased by nearly two-thirds before returning to normal.

"The particles inside the heliosphere are disappearing, episodically," Stone explains. "They haven't ever fully disappeared; the numbers have come back each time, so far. But evidently, the particles have been able to get out."

Coinciding with those dips are bumps—increases in the number of high-energy particles originating outside the heliosphere that are making their way inside. This decrease in one type of particle and increase in another indicates that Voyager 1 is nearing the edge of our solar system. Scientists are currently crunching data related to a third indicator—a switch in the direction of the magnetic field, which should occur when the spacecraft reaches interstellar space. The magnetic field within the heliosphere is created by the sun; the one outside the heliosphere is generated elsewhere in the galaxy. Therefore, it would be hard to imagine that the two are linked in any way, causing them to be oriented in the same direction. Also, indirect evidence suggests that unlike the magnetic field inside the heliosphere, which runs east-west with relation to the spin of the sun, the field outside is oriented more north-south.

What will Voyager find once it exits the solar system? "We're going to learn what's out there," Stone says. "There's clearly a magnetic field—we'll find out if it's what we think it is, how strong it is. We need to get out and measure it. That's what Voyager's taught us—go measure it."

The team still has about a dozen years to try to "get out" and make that measurement. Voyager is fueled by the natural radioactive decay of plutonium-238, which produces heat that thermocouples convert into electricity. Based on the plutonium's half-life, the Voyager team expects that they will need to begin shutting down instruments in 2020 and that they will turn off the last one by 2025.

Depending on when exactly that happens, the spacecraft will have spent close to 50 years exploring space and teaching scientists back on Earth new ways to think about the solar system and its surroundings. Reflecting back on his years of involvement with Voyager, Ingersoll says the mission pretty much taught him what science should be. "It taught me a kind of science that I have come to appreciate," he says. "We all know that science isn't just facts that you memorize. It's the discovery and surprise and learning from all the things that you don't know. Voyager has been such a great example of that."