A Hint of Higgs: An Update from the LHC 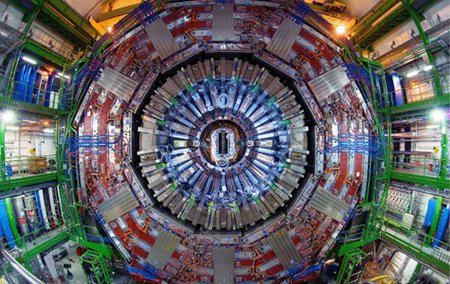 The physics world was abuzz with some tantalizing news a couple of weeks ago. At a meeting of the European Physical Society in Grenoble, France, physicists—including some from Caltech—announced that the latest data from the Large Hadron Collider (LHC) might hint at the existence of the ever-elusive Higgs boson.

According to the Standard Model, the remarkably successful theory of how all the fundamental particles interact, the Higgs boson is responsible for endowing every other particle with mass. And as the last remaining particle predicted by the Standard Model yet to be detected, its discovery is one of the chief goals of the LHC, the most powerful particle accelerator on Earth and perhaps the most complex scientific endeavor ever attempted.

Sitting underground near Geneva, Switzerland, the LHC accelerates protons around a ring almost five miles wide to nearly the speed of light, producing two proton beams that careen toward each other. Most of the protons just keep on going past each other, but a small fraction of them collide, creating other particles in the process. But these particles are fleeting, decaying into lighter particles before they can be detected. The challenge for physicists is to pick out hints of new, exotic physics from the flurry of newly minted particles. By sifting through the data, they hope to tease out signs that some of these particles are Higgs bosons.

The LHC is equipped with several detectors, but the ones that are the largest and are going after the Higgs are called ATLAS (A Toroidal LHC Apparatus) and the Compact Muon Solenoid (CMS); Caltech plays a prominent role in the latter. Both experiments recently reported what physicists are calling "excess events." That is, the LHC appears to have created slightly more events than would be expected if the Higgs does not exist. The bump occurred in the region between 130 and 150 gigaelectron volts (GeV—a unit of energy that is also a unit of mass, via E = mc2, where the speed of light, c, is set to a value of one), which is the expected mass range of the Higgs. But the data are not yet statistically significant enough to be called a definite signal, let alone a discovery of the Higgs particle, says Harvey Newman, professor of physics.

There are two possible explanations for these results, he says. The bump in the data could just be background events due to some unknown source or it could be the first signs of the Higgs. "One could speculate that it's an unusual statistical fluctuation," he says. "But I don't think so."

The LHC is now operating with 7 teraelectron volts (TeV, a thousand times higher than a GeV) of energy at the center of mass between the two proton beams, and may increase to 8 TeV next year (the maximum energy is 14 TeV, which will be reached by 2014).

Physicists will continue to ramp up the LHC, boosting it to higher energies and increasing the number of collisions to improve the chances of producing Higgs bosons. With several times more particle interactions, the physicists are continuing to close in on the Higgs, as well as other new particles and interactions. There's a chance that by the end of next year, they may determine, once and for all, whether the Higgs exists.

If it turns out that the Higgs does not exist, then physicists will have to do some serious rethinking about the Standard Model. "But even if the Higgs exists, the Standard Model still has fundamental problems," Newman says. For example, the theory is not self-consistent. "The most natural way to solve these problems," he says, "is with supersymmetry."

Evidence for supersymmetry, abbreviated SUSY ("soosie"), is also something that physicists had anticipated at the LHC. The theory proposes that each fundamental particle has a supersymmetric partner—for example, a quark's partner is called a "squark." There are many versions of the theory, from simple toy models to subtler ones. So far, however, the LHC hasn't detected any signs of supersymmetry. "Many of the models we're excluding are toy models," says Maria Spiropulu, an associate professor of physics. So even though people might be disappointed, it's way too early to rule out the theory. "Some people get depressed that SUSY is being excluded. But it's quite the opposite—we're confirming that nature is much more subtle than what the obvious thing would be."

Caltech at the LHC

Spiropulu and Newman, who are now at the LHC working on the latest data run, lead the Caltech team of 40 physicists, students, and engineers that's part of the CMS collaboration. Spiropulu, who joined the faculty in 2008, is an expert on devising ways to discover exotic phenomena beyond the Standard Model, such as theories of supersymmetry that predict particles of dark matter, the mysterious stuff that makes up almost a quarter of the universe.

When Newman arrived at Caltech in the 1980s, he did a lot of the groundwork in designing the crystal detectors that are now used in CMS. He also developed the worldwide grid of networks and data centers that stores and processes the flood of data coming from the LHC. With the LHC generating gigabytes of data per second, no single site can hold all the information, so the data is handled in a distributed fashion at hundreds of sites throughout the world, including Caltech's Center for Advanced Computing Research, where the first university-based center for LHC data analysis was invented. Newman's team also runs the transatlantic network that links the LHC to the United States, allowing data to flow between Europe and North America. His team, together with Steven Low, professor of computer science and electrical engineering, developed the state-of-the-art applications for transferring data over long distances, enabling terabytes of data to stream between sites at speeds of up to the 100 gigabits per second. Newman and engineer Philippe Galvez also developed a system called Enabling Virtual Organizations, an internet-based tool that helps physicists and scientists from other fields communicate and collaborate from anywhere in the world.

According to Newman and Spiropulu, the Caltech team consists of experts in everything from the detector and data analysis to how new phenomena might manifest themselves at the LHC. Because the group is involved in so many aspects of CMS, Caltech is making a particularly significant contribution, Spiropulu says. "We are one of the leading groups in the U.S.—and I would say also in the entire CMS collaboration."

Undergraduates are also a critical part of the team. In the last two years, there have been a total of 24 students from the Summer Undergraduate Research Fellowships (SURF) and Minority Undergraduate Research Fellowships (MURF) programs, as well as from programs at CERN (the European Organization for Nuclear Research, the site of the LHC). This year, four SURF students are spending their summer at the LHC. "Caltech students can really 'do things' from an early age—at a level one rarely sees elsewhere," Newman says.