Ironing Out the Details of the Earth's Core 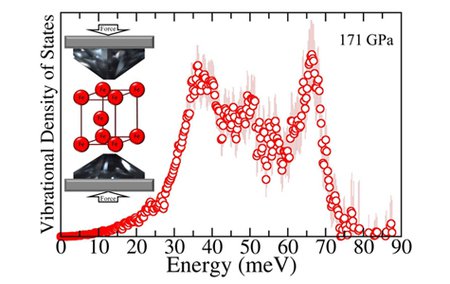 PASADENA, Calif.—Identifying the composition of the earth's core is key to understanding how our planet formed and the current behavior of its interior. While it has been known for many years that iron is the main element in the core, many questions have remained about just how iron behaves under the conditions found deep in the earth. Now, a team led by mineral-physics researchers at the California Institute of Technology (Caltech) has honed in on those behaviors by conducting extremely high-pressure experiments on the element.

"Pinpointing the properties of iron is the gold standard—or I guess 'iron standard'—for how the core behaves," says Jennifer Jackson, assistant professor of mineral physics at Caltech and coauthor of the study, which appears in the December 20 issue of Geophysical Research Letters. "That is where most discussions about the deep interior of the earth begin. The temperature distribution, the formation of the planet—it all goes back to the core."

To learn more about how iron behaves under the extreme conditions that exist in the earth's core, the team used diamond anvil cells (DAC) to compress tiny samples of the element. The DACs use two small diamonds to squeeze the iron, reproducing the types of pressures felt in the earth's core. These particular samples were pressurized to 171 Gigapascals, which is 1.7 million times the pressure we feel on the surface of the earth.

To complete the experiments, the team took the DACs to the Advanced Photon Source at Argonne National Laboratory in Illinois, where they were able to use powerful X-rays to measure the vibrational density of states of compressed iron. This information allows the researchers to determine how quickly sound waves move through iron and compare the results to seismic observations of the core.

"The vibrational properties that we were able to measure at extraordinarily high pressures are unprecedented," says Jackson. "These pressures exist in the earth's outer core, and are very difficult to reproduce experimentally."

Caitlin Murphy, a graduate student in Jackson's group and first author of the paper, says the group was happy to find that their data set on the vibrational properties of iron evolved smoothly over a very wide pressure range, suggesting that their pressure-dependent analysis was robust, and that iron did not encounter any phase changes over this pressure range. To help achieve these successful measurements at high pressures, the group used some innovative techniques to keep the iron from thinning out in the DACs, such as preparing an insert to stabilize the sample chamber during compression. Additionally, they measured the volume of the compressed iron sample in situ and hydrostatically loaded the iron sample with neon into the sample chamber.

"These techniques allowed us to get the very high statistical quality we wanted in a reasonable amount of time, thus allowing us to obtain accurate vibrational properties of compressed iron, such as its Grüneisen parameter," says Jackson. "The Grüneisen parameter of a material describes how its total energy changes with compression and informs us on how iron may behave in the earth's core. It is an extremely difficult quantity to measure accurately."

The team was also able to get a closer estimate of the melting point of iron from their experiments—which they report to be around 5800 Kelvin at the boundary between the earth's solid inner core and liquid outer core. This information, combined with the other vibrational properties they found, gives the group important clues for estimating the amount of light elements, or impurities, in the core. By comparing the density of iron at the relevant pressure and temperature conditions with seismic observations of the core's density, they found that iron is 5.5 percent more dense than the solid inner core at this boundary.

"With our new data on iron, we can discuss several aspects of the earth's core with more certainty and narrow down the amount of light elements that may be needed to help power the geodynamo—the process responsible for maintaining the earth's magnetic field, which originates in the core," says Jackson.

According to Murphy, the next step is to perform similar experiments alloying iron with nickel and various light elements to determine how the density and, in particular, the vibrational properties of pure iron are affected. In turn, they will be able to evaluate the amount of light elements that produce a closer match to seismic observations of the core.

"There are a few candidate light elements for the core that everyone is always talking about—sulfur, silicon, oxygen, carbon, and hydrogen, for instance," says Murphy. "Silicon and oxygen are a few of the more popular, but they have not been studied in this great of detail yet. So that's where we will begin to expand our study."

The study, "Grüneisen parameter of hcp-Fe to 171 GPa," was funded by the California Institute of Technology, the National Science Foundation, and the U.S. Department of Energy. Bin Chen, a former postdoctoral scholar in Jackson's lab, and Wolfgang Sturhahn, senior technologist at NASA's Jet Propulsion Laboratory and visiting associate at Caltech, were also coauthors on the paper.