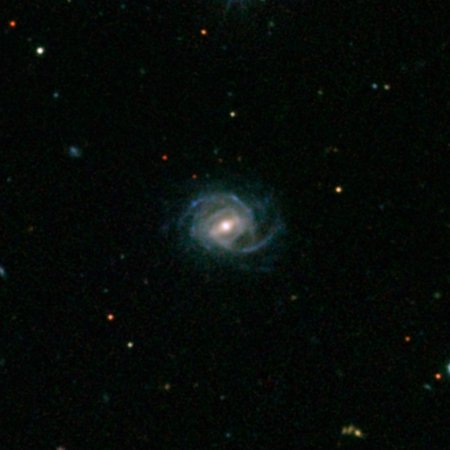 The huge galaxy "SDSS J094700.08+254045.7" stands as one of the biggest and brightest super spirals. The mega-galaxy's starry disk and spiral arms stretch about 320,000 light-years across, or more than three times the breadth of the Milky Way. Credit: SDSS
Tags:
astronomy & physics

A strange new kind of galactic beast has been spotted in the cosmic wilderness. Dubbed "super spirals," these unprecedented galaxies dwarf our own spiral galaxy, the Milky Way, and compete in size and brightness with the largest galaxies in the universe.

Super spirals have long hidden in plain sight by mimicking the appearance of typical spiral galaxies. A new study using archived NASA data reveals these seemingly nearby objects are in fact distant, behemoth versions of everyday spirals. Rare, super spiral galaxies present researchers with the major mystery of how such giants could have arisen.

"We have found a previously unrecognized class of spiral galaxies that are as luminous and massive as the biggest, brightest galaxies we know of," says Patrick Ogle, an astrophysicist at Caltech's Infrared Processing and Analysis Center (IPAC) and the lead author of a new paper on the findings published in The Astrophysical Journal. "It's as if we have just discovered a new land animal stomping around that is the size of an elephant but had shockingly gone unnoticed by zoologists."