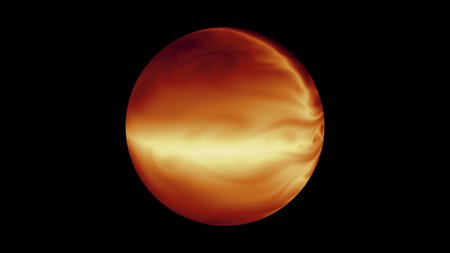 Simulated Atmosphere of a Hot Gas Giant HD 80606b Light Curve The turbulent atmosphere of a hot, gaseous planet known as HD 80606b is shown in this simulation based on data from NASA's Spitzer Space Telescope. Credit: NASA/JPL-Caltech/MIT/Principia College
Tags:
astronomy & physics

The last decade has seen a bonanza of exoplanet discoveries. Nearly 2,000 exoplanets -- planets outside our solar system -- have been confirmed so far, and more than 5,000 candidate exoplanets have been identified. Many of these exotic worlds belong to a class known as "hot Jupiters." These are gas giants like Jupiter but much hotter, with orbits that take them feverishly close to their stars.

At first, hot Jupiters were considered oddballs, since we don't have anything like them in our own solar system. But as more were found, in addition to many other smaller planets that orbit very closely to their stars, our solar system started to seem like the real misfit.