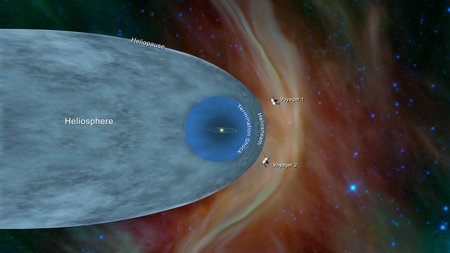 This illustration shows the position of NASA's Voyager 1 and Voyager 2 probes, outside of the heliosphere, a protective bubble created by the sun that extends well past the orbit of Pluto. Voyager 1 exited the heliosphere in August 2012. Voyager 2 exited at a different location in November 2018. [VIEW FULL SIZE] Credit: NASA/JPL-Caltech 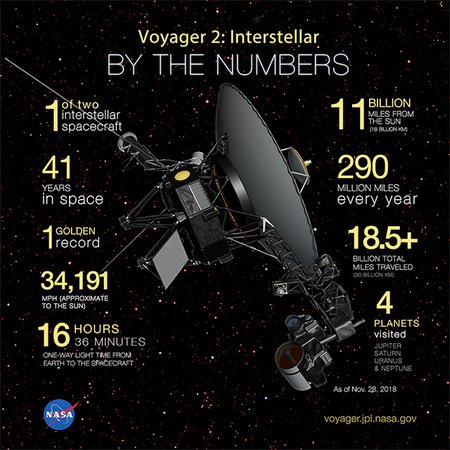 For the second time in history, a human-made object has reached the space between the stars. NASA's Voyager 2 probe now has exited the heliosphere—the protective bubble of particles and magnetic fields created by the sun.

Members of NASA's Voyager team discussed the findings at a news conference today at the meeting of the American Geophysical Union (AGU) in Washington.

Comparing data from different instruments aboard the trailblazing spacecraft, mission scientists determined the probe crossed the outer edge of the heliosphere on November 5. This boundary, called the heliopause, is where the tenuous, hot solar wind meets the cold, dense interstellar medium. Its twin, Voyager 1, crossed this boundary in 2012, but Voyager 2 carries a working instrument that will provide first-of-its-kind observations of the nature of this gateway into interstellar space.

"There is still a lot to learn about the region of interstellar space immediately beyond the heliopause," said Ed Stone, Voyager project scientist and the David Morrisroe Professor of Physics at Caltech.

Voyager 2 now is slightly more than 11 billion miles (18 billion kilometers) from Earth. Mission operators still can communicate with Voyager 2 as it enters this new phase of its journey, but information—moving at the speed of light—takes about 16.5 hours to travel from the spacecraft to Earth. By comparison, light traveling from the sun takes about eight minutes to reach Earth.