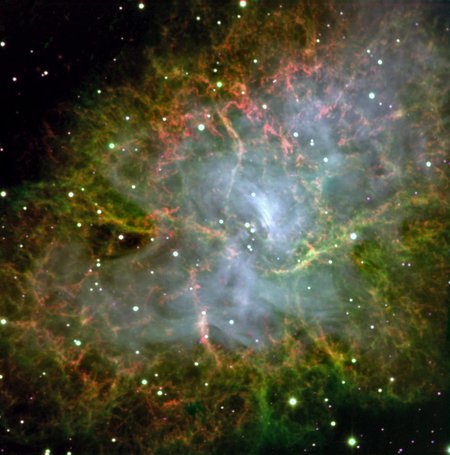 This image of the Crab Pulsar was taken with CHIMERA, an instrument on the Hale telescope at the Palomar Observatory, operated by Caltech. This pulsar is the end result of a star whose mass collapsed at the end of its life. It weighs as much as our sun, but spins 32 times per second. The instrument focused on the pulsar for a 300-second exposure to produce a color image. CHIMERA zoomed in on the pulsar and imaged it very fast, then imaged the rest of the scene slowly to create the image. Credit: NASA/JPL-Caltech 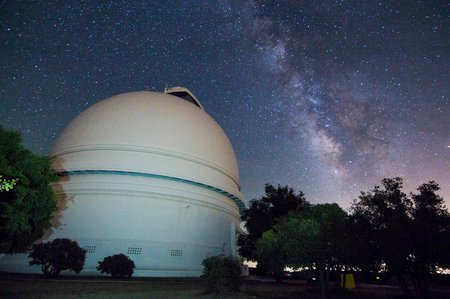 The CHIMERA instrument is located at the Hale Telescope at the Palomar Observatory near San Diego, California. Credit: Gregg Hallinan
Tags:
astronomy & physics

At the Palomar Observatory near San Diego, astronomers are busy tinkering with a high-tech instrument that could discover a variety of objects both far from Earth and closer to home.

The Caltech HIgh-speed Multi-color camERA (CHIMERA) system is looking for objects in the Kuiper Belt, the band of icy bodies beyond the orbit of Neptune that includes Pluto. It can also detect near-Earth asteroids and exotic forms of stars. Scientists at Caltech and NASA's Jet Propulsion Laboratory are collaborating on this instrument.

"The Kuiper Belt is a pristine remnant of the formation of our solar system," said Gregg Hallinan, CHIMERA principal investigator at Caltech. "By studying it, we can learn a large amount about how our solar system formed and how it's continuing to evolve."

"Each of CHIMERA's cameras will be taking 40 frames per second, allowing us to measure the distinct diffraction pattern in the wavelengths of light to which they are sensitive," said Leon Harding, CHIMERA instrument scientist at JPL. "This high-speed imaging technique will enable us to find new Kuiper Belt objects far less massive in size than any other ground-based survey to date."

Hallinan's CHIMERA team at Caltech and JPL published a paper led by Harding describing the instrument this week in the Monthly Notices of the Royal Astronomical Society.