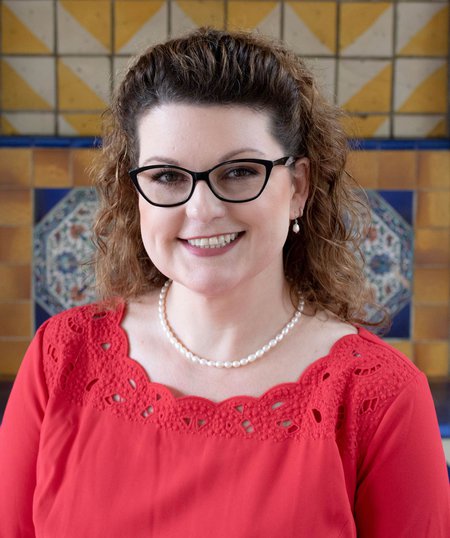 Caltech's new university librarian, Kara Whatley, came to the Institute from New York City, where she was the head of science and engineering library services for NYU. Whatley was born in Arkansas, earned her bachelor's degree in biology from Hendrix College (a small liberal arts university in Arkansas), and went on to earn one master's degree in library and information studies at the University of Oklahoma and another in biological sciences at Texas Tech. We sat down with her to talk about modern librarianship and her goals for supporting Caltech's researchers.

Why did Caltech seem like a good fit for you?

As a science librarian, this is the dream job. Also, even though I've always worked in large research institutions, I attended a small liberal arts college. This is the best of both those worlds: a small institution with an outsized research reputation.

That means I can realistically accomplish my goal to meet all of the faculty members during my first year here, whereas I'm not sure that would have been possible at the other institutions I've worked in. So, the scale of this place and the ability to design library services to closely fit the needs of the researchers and students in almost a boutique kind of way was really appealing to me.

When did you know you wanted to be a librarian?

When I was doing my undergrad at Hendrix in biology, I was the one who ended up doing the literature review. My peers would be out in the field or doing work in the lab, and I was the one who went over to the library and searched the CD-ROMs for the literature. I realized that's what I really enjoyed doing, and it was a way I could contribute to the science that was being done.

Academic libraries are very different now than when you were an undergraduate.

I think of libraries as having one foot in the 21st century and one in the 19th century, because in many ways we are still supporting traditional formats and traditional access to those formats. There are certain disciplines, including mathematics and humanities, where the mode of communication is still a print book.

How does your work support researchers?

My work as a librarian is about supporting knowledge creation and learning as well as the dissemination of that knowledge and preserving access to it for posterity.

That plays out across the research life cycle from the data our researchers generate in lab notebooks, the analysis they're doing, the publication, and its preservation. We provide services to support research in all of those phases.

We work with students to help them understand the literature and how it's structured in a particular field. But we also help them think about intellectual property related to electronic lab notebooks and tools like that.

We also help researchers when they're working with their research data. In many cases, funders require that they preserve and publish research data, and have data management plans as part of their grant proposals. So that's where CaltechDATA, our data repository, comes in.

Also, here at Caltech, we've built out CaltechAUTHORS, our publications repository. We actually have four people engaged in making sure that the research output of the Institute is captured and shared. In many cases, the way campus research gets shared around the world, especially in places where researchers may not have access to the journal literature, is via CaltechAUTHORS.

What are some of the challenges for librarians today?

Open access is for sure a challenge. The amount of money that an institution like Caltech spends buying back the outputs of its research is substantial, but open access in and of itself is also expensive. Journal publishing, peer review, editing ... all of the things that are associated with open access aren't free. And so being part of the conversation as libraries and scholars and publishers and funding agencies navigate through open access is very important to us.

I think also grappling with what preservation means in a digital age is key. I was having a conversation with one of our division chairs earlier this week, and it turns out that division has lab notebooks from a famous Caltech scientist sitting on the shelves in one of its rooms. And so, of course, I'm interested in what we can do to help preserve those. But in some ways, that's an easy solution, because paper is a pretty good preservation format. On the other hand, when I was cleaning out my desk at NYU, one of the things I found in the corner of my desk drawer was a stack of floppy disks held together with rubber bands. There were files on there, of course, but I didn't have any way to read them. That's the kind of challenge that we have with born-digital information.

What are some of your longer-term goals?

I'm interested in exploring more consortium partnerships in the science and engineering space, where Caltech researchers would be able to search a catalog and borrow directly from another library's collection. I'm also thinking about agreements we can make with other libraries where we could say, "We don't collect deeply in this particular area because our partner does, [so] we're going to share access to those resources and instead collect deeply in these particular areas of science and engineering and you can rely on our collections in those areas."

Oh, yes. Because your private space can be so small in New York, people tend to give you more metaphorical space in public, so they don't make eye contact, and they just keep moving, and they don't talk to you. And so it's lovely to come here and to have people interact with me in public in a way that I would never have gotten in New York.