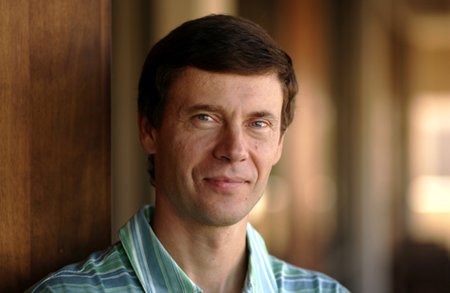 PASADENA, Calif.-- Alexei Kitaev, a California Institute of Technology (Caltech) faculty member, has been named a MacArthur Fellow, winning one of the five-year, $500,000 grants that are awarded annually to creative, original individuals and that are often referred to as the "genius" awards.

With a joint appointment at Caltech as professor of theoretical physics and computer science in the Divisions of Physics, Mathematics and Astronomy and of Engineering and Applied Science, Kitaev explores the mysterious behavior of quantum systems and their implications for developing practical applications, such as quantum computers. He has made important theoretical contributions to a wide array of topics within condensed-matter physics, including quasicrystals and quantum chaos.

More recently, Kitaev has devoted considerable attention to the use of quantum physics for performing computation. Upon learning of the first algorithm for factoring numbers (an important aspect of cryptography) with quantum computers, he independently developed an alternative approach using "phase estimation," a solution that generalizes to an even wider range of calculations.

Though his work is focused mainly at the conceptual level, he also participates in "hands-on" efforts to develop working quantum computers.

Kitaev says he was "very surprised" when he received the call from Daniel Socolow, director of the MacArthur Fellows Program, telling him of his selection for the award. "I didn't know what the award was at first," admits Kitaev, who was born and educated in Russia. "But then I looked up the names of people who have previously received a MacArthur award, and saw that they are very good scientists. I am excited and honored to be in the same group with them."

"We are thrilled that Alexei has received this well-deserved honor," says Andrew Lange, the Marvin L. Goldberger Professor of Physics and chair of the Division of Physics, Mathematics and Astronomy at Caltech. "He is a stunningly original thinker who has made profound theoretical contributions to both quantum computing and condensed-matter physics. Alexei forged a deep connection between these two disparate subjects by proposing the 'topological quantum computer,' an idea now being aggressively pursued in laboratories around the world. Fostering such interdisciplinary insights is a central part of Caltech's mission, and we are proud to have Alexei on our faculty."

Kitaev received a diploma from the Moscow Institute of Physics and Technology in 1986, and his PhD from Russia's Landau Institute for Theoretical Physics in 1989. He served as a researcher at Microsoft Research from 1999 until 2001. He first came to Caltech as a visiting associate and a lecturer in 1998, and he was named professor of theoretical physics and computer science in 2002.

The MacArthur awards traditionally come out of the blue--most awardees have no idea that they are even being considered--and with no strings attached. MacArthur Fellows are not required to account for the ways in which they spend the money. Still, Kitaev says he feels it is important for him to use the award to do work that is "innovative and creative," and expects to take some time to figure out just what will fit the bill.

"The MacArthur Fellows Program celebrates extraordinarily creative individuals who inspire new heights in human achievement," says MacArthur president Jonathan Fanton. "With their boldness, courage, and uncommon energy, this new group of Fellows--men and women of all ages in diverse fields--exemplifies the boundless nature of the human mind and spirit."

Kitaev is one of 25 newly named 2008 Fellows--a list which includes UCLA astronomer Andrea Ghez, who received her MS in 1989 and her PhD in 1993 from Caltech, and Harvard Medical School neurobiologist Rachel Wilson, who was a postdoctoral fellow at Caltech from 2001 to 2004. Kitaev also joins the ranks of previous Caltech MacArthur Fellows, including its two 2007 awardees, Michael Elowitz and Paul W. Rothemund.