A Mathematical Approach to Physical Problems: An Interview with Rupert Frank 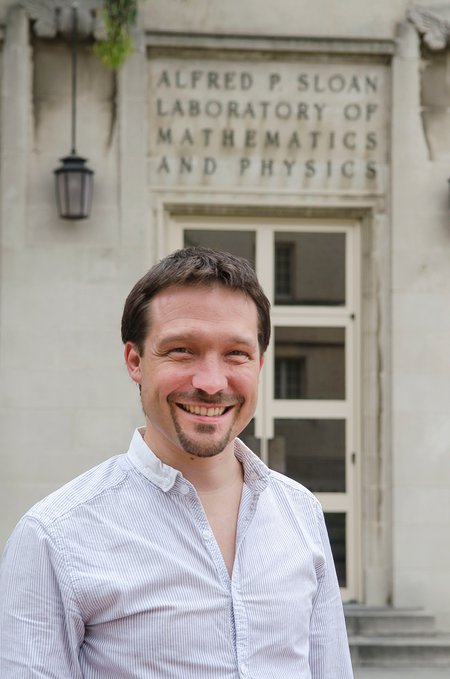 Rupert Frank joined the Caltech faculty this spring as a professor of mathematics. Originally from Munich, Germany, Frank graduated from the Ludwig Maximilian University in his hometown in 2003 and his PhD from the Royal Institute of Technology in Stockholm, Sweden, in 2007. After completing a postdoctoral position at Princeton University, he was hired as an instructor there and quickly worked his way up to assistant professor. Frank recently answered a few questions about his work at the intersection of mathematics and physics.

What do you work on?

I work in this area called mathematical physics. It involves taking things that we see and observe in nature and trying to explain them mathematically from first principles. In mathematics, people often say that they're doing algebra or geometry or something, where they are talking about the methods they are using. However, for us it's more that we use whatever methods we need in order to understand a concrete problem. It's much more problem-specific.

For example, one thing that we still cannot explain—that we are actually really far from being able to explain—is the emergence of periodic structures; that is, structures that repeat themselves. It's clear in nature that it does happen. We see crystals, for example. But we still have no idea why this happens. It's embarrassing really.

So how do you approach a problem like that?

We like to start, for example, with the rules of quantum mechanics—some axioms, which describe the state and the energy of a system. From there, we would like to see that periodic structures can emerge on a macroscopic scale.

Sometimes we work with smaller dimensions—one-dimensional or two-dimensional models, not three dimensional, as nature is. Or we work with discrete models where you assume that all objects can only sit at discrete sites; they cannot move continuously through space. There is a hope that by working with such models, one can reveal more about the overall system.

What problems are you currently addressing?

An important aspect of my work is symmetry and symmetry breaking. Periodicity is a particular case of symmetry.

A problem that I'm always working on is how to explain superconductivity. Superconductivity is a quantum phenomenon that happens on a macroscopic scale, meaning that I can observe it with my bare eyes. [The phenomenon involves the electrical resistance of certain metals and ceramics dropping to zero when cooled below a particular critical temperature. This means such materials can conduct electricity for longer periods, more efficiently. They also repel magnetic fields.] But I cannot explain it with ordinary classical mechanics; I need quantum mechanics. So again, the point is how do we come up with a theory for superconductivity on a macroscopic scale from a microscopic model using the laws of quantum mechanics? And that has been understood, I would say, on a physical level, and there are models that work numerically very well, but mathematically it has not been clarified.

How would you say the discipline of mathematical physics informs both mathematics and physics?

Well, mathematics and physics have always been interrelated, and a lot of mathematics has been developed while trying to solve physical problems. I think physics, from a mathematics perspective, leads to interesting mathematical problems. You are trying to prove something, and it's typically related to some optimization problem—where you want to minimize energy costs or something. So it gives you a way of thinking.

In terms of the benefit to physics, I think we can sometimes provide a different perspective. Physicists typically speak about what they consider to be typical cases within a model, whereas in mathematics, one usually works on the negative side—trying to exclude the atypical. So from time to time, we come up with problems that really require physical explanation that has not been there before.

How did you originally become interested in mathematics and physics?

Actually, both my mother and my father are mathematicians, and one of my brothers is a mathematician; the other is a computer scientist. So it was around when I was growing up, that's for sure. By my third year of university studies, I knew which field of mathematics I wanted to focus on. It can be called functional analysis, operator theory, or mathematical physics. And I saw that all of this was intrinsically related to quantum mechanics. To a certain extent, this field of mathematics was created to explain quantum mechanics. So it was clear that I had to go into physics.

Why did you decide to come to Caltech?

Well, it's a very nice place, and it's a smaller place. That gives you a lot of opportunities because you're not only one of the many. Everybody expects you to do something, and they help you to do it. That's something that I really appreciate.