Measuring the Minute Wobbles of Stars 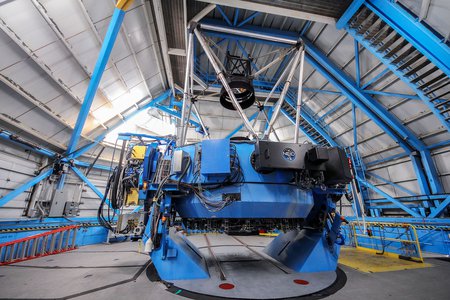 First-light spectrum of the star 51 Pegasi as captured by NEID on the WIYN telescope with a blowup of a small section of the spectrum. The right panel shows the light from the star, highly dispersed by NEID, from short wavelengths (bluer colors) to long wavelengths (redder colors). The colors shown, which approximate the true color of the starlight at each part of image, are included for illustrative purposes only. The region in the small white box in the right panel, when expanded (left panel), shows the spectrum of the star (longer dashed lines) and the light from the wavelength calibration source (dots). Deficits of light (dark interruptions) in the stellar spectrum, are due to stellar absorption lines — "fingerprints" of the elements that are present in the atmosphere of the star. By measuring the subtle motion of these features, to bluer or redder wavelengths, astronomers can detect the "wobble" of the star produced in response to its orbiting planet. Credit: Guðmundur Kári Stefánsson/Princeton University/Penn State/NSF's National Optical-Infrared Astronomy Research Laboratory/KPNO/AURA

As the planets in our solar system go around the sun, they tug on it, causing it to wobble. Jupiter, our most massive planet, yanks on our sun to a significant degree, whereas Earth, which is tiny by comparison, exerts a much weaker tug.

Other Earth-like planets circling stars in our galaxy would similarly cause minute wobbles in their stars, so planet hunters search for these wobbles using a technique called the radial velocity method. So far, they have not found any exoplanets like the Earth, but that may change with a new telescope instrument called NEID.

"We may be able to find the first Earth-mass planets with NEID," says Arpita Roy, a Caltech postdoctoral scholar who works with Professor of Astronomy Andrew Howard and who helped build NEID with a team led by researchers at Penn State. Roy says that the instrument can currently detect stellar motions of about 30 centimeters per second but that their ultimate goal is to try to get down to 10 centimeters per second on certain stars—the speed our sun moves due to Earth's tug.

NEID was recently installed on the 3.5-meter WIYN telescope at Kitt Peak National Observatory in Southern Arizona and made its first observations on December 13, 2019. The instrument is being developed as part of a joint initiative between NASA and the National Science Foundation. The name NEID is derived from the word meaning "to see" in the native language of the Tohono O'odham, on whose land Kitt Peak is located.

Roy is also the project scientist for an upcoming instrument similar to NEID, called the Keck Planet Finder, scheduled to be installed at the W. M. Keck Observatory on Maunakea, Hawaii, in 2021.

Says Roy, "In many ways, NEID is paving the way for the Keck Planet Finder, which should be able to find Earth-mass planets even faster."