A Metal Unlike Itself 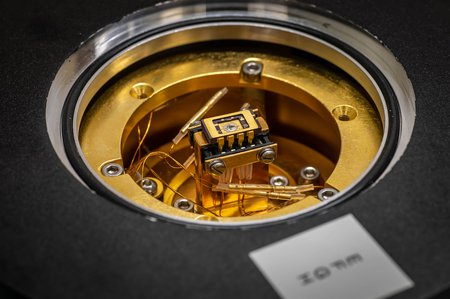 The researchers studied a sample of lithium osmate using a method called ultrafast laser spectroscopy. In this close-up image, the lithium osmate crystal is the small black sample embedded in the center of the silver epoxy blob, loaded into the measurement apparatus. The silver epoxy assures good thermal contact with the cold finger (gold), which allows the sample to be cooled down to low temperatures. The large circular cut-out on the face of this cryostat portion of the instrument allows laser beams to reach the crystal, and reflected light from the crystal to reach an external detector. Credit: Caltech/Hsieh Lab
Tags:
astronomy & physics, materials science

One of the most fundamental rules physics students learn in college is that metals cannot possess an internal electric field. This makes metals, in a sense, opposite to "ferroelectrics," which are materials that spontaneously create their own electric fields. However, for nearly 50 years, scientists have wondered if perhaps a metal could act unlike itself and display ferroelectric-like behavior. In 2013, one such candidate, called lithium osmate, or LiOsO3, was discovered.

Now, Caltech researchers have uncovered details of the mechanism by which LiOsO3 acts in ferroelectric ways, a finding that may have implications for the design of new metals in the future for use in computers and other devices.

"It's hard to predict at this stage what this type of material would be used for, but we are on the cutting edge of researching these metals with entirely new properties," says Nick Laurita, a postdoctoral scholar in physics and lead author of a new paper that appeared July 19 in the journal Nature Communications. Laurita works in the laboratory of David Hsieh, a professor of physics at Caltech and a member of the Institute for Quantum Information and Matter (IQIM) at Caltech.

"This presents a pathway for realizing a new type of material that marries two ostensibly incompatible properties, ferroelectricity and metallicity," says Hsieh.

Ferroelectric materials, which are always insulating, can be found in everything from ultrasound machines to infrared cameras to fuel injectors on diesel engines. "The materials are so useful because you can switch their electric fields from one direction to another," says Laurita.

While metals generally cannot become ferroelectric, two scientists, P.W. Anderson and E.I. Blount, suggested in 1965 that some metals may exhibit certain ferroelectric-like properties. In particular, they said, a metal's crystal structure might exhibit polar atomic distortions similar to what occurs in insulating ferroelectrics.

After the metal LiOsO3 was discovered in 2013, researchers came up with new theories to explain in more detail how this might work. They predicted that the free-roaming electrons in the metal must be decoupled from their distorted atoms—otherwise, the electrons would arrange themselves in such a way as to zero out any electric fields and no distortions would occur.

In other words, the electrons must be, in a sense, "unaware" of the atomic distortions happening nearby.

In their latest paper, Laurita, Hsieh, and their colleagues show this to be the case using a method called ultrafast laser spectroscopy. In this technique, an initial pulse excites samples to high-energy and then a second, weak laser pulse tracks how the electrons in the sample lose their energy as a function of time.

"What we found is that the electrons in LiOsO3 only gave up their energy to vibrations in some particular directions but not the direction needed for polarization, thereby revealing that the electrons were decoupled from the vibrations causing the ferroelectricity," says Laurita. "It's as if you've thrown a pebble in a pond, and the ripples don't propagate outwards in a circle but only along certain directions. This shows how ferroelectric-type behaviors can occur in metals."

"It's exciting that the Anderson-Blount mechanism put forth decades ago holds true in this unusual material," says Hsieh.

The Nature Communications study, titled, "Evidence for the weakly coupled electron mechanism in an Anderson-Blount polar metal," was funded by the U.S. Department of Energy, the David and Lucile Packard Foundation, the National Science Foundation, the U.S. Army Research Office, and the National Key Research and Development Program of China. Other authors include: A. Ron and Jun-Yi Shan of Caltech; D. Puggioni, N.Z. Koocher and J.M. Rondinelli of Northwestern University; K. Yamaura of the National Institute for Materials Science in Japan; and Y. Shi of the Chinese Academy of Sciences in China.