Nailing It: Caltech Engineers Help Show That InSight Lander Probe Can Hammer Itself Into Martian Soil

José Andrade's research team will help InSight boldly go where no one has gone before: beneath the surface of Mars 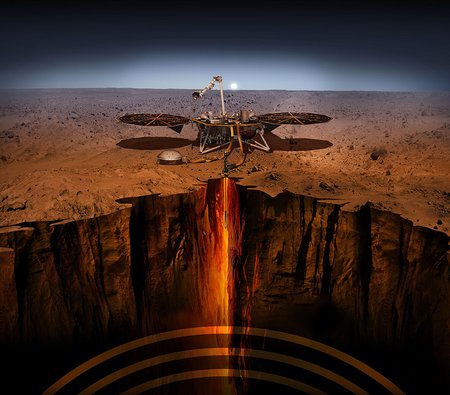 On November 26, NASA's InSight lander will complete its six-and-a-half month journey to Mars, touching down at Elysium Planitia, a broad plain near the Martian equator that is home to the second largest volcanic region on the planet.

There, NASA scientists hope to "give the Red Planet its first thorough checkup since it formed 4.5 billion years ago," according to the InSight mission website. Previous missions have examined features on the surface, but many signatures of the planet's formation—which can provide clues about how all the terrestrial planets formed—can only be found by sensing and studying its "vital signs" far below the surface.

To check on those vital signs, InSight will come equipped with two main instrument packages: a seismometer for studying how seismic waves (for example, from marsquakes and meteorite impacts) travel through the planet and a "mole" that will burrow into the ground, dragging a tether with temperature sensors behind it to measure how temperatures change with depth on the planet. These instruments will tell scientists about Mars's interior structure (similar to the way an ultrasound lets doctors "see" inside a human body) and also about the heat flow from the planet's interior.

Engineers hope that the mole will reach a depth of between three and five meters—far enough down that it will be isolated from the temperature fluctuations of day and night and Mars's annual cycle on the surface above. Meters may not sound like much, but to dig that far using only equipment that can be launched on a spacecraft and controlled from 55 million miles away is a technical challenge that has never been attempted before.

Using a sliding weight inside its narrow body, the mole, which is 15.75 inches (400 millimeters) long and weighs just 1.9 pounds (860 grams), hammers itself into the ground, 1 mm at a time, while dragging a tether that is studded with 14 temperature sensors along its length. A traditional drill attempting to perform the same task would need to be as long as the hole it was attempting to drill—and would need a massive supporting structure. Were it to hammer continuously, the mole would take between a few hours to a few days to reach its final depth, depending on the characteristics of the soil. However, the mole will stop every 50 centimeters to measure the soil thermal conductivity, a process which requires periods of cooling and heating lasting several days. With the additional time needed to assess progress and send new commands, the mole could take six weeks or more to reach its final depth.

When designing the probe, engineers at JPL, which Caltech manages for NASA, wanted to be certain that the mole would be capable of reaching the necessary depth, and so they called on Caltech's José Andrade, George W. Housner Professor of Civil and Mechanical Engineering in the Division of Engineering and Applied Science and an expert on the physics of granular materials.

"About five years ago, when the mole kept getting stuck during testing, the InSight team pulled together what's called a 'tiger team'—a bunch of specialists from different areas who are brought in to help resolve an issue," Andrade says. "I was called to serve on this tiger team as an expert in soil mechanics."

Because soil is a granular material—a conglomeration of solid particles that are each larger than a micrometer—it exhibits somewhat unusual properties. For example, soil composed of round particles will flow easily as the particles slide past one another, like sand in an hourglass. But soil composed of the same sizes of particles but with more jagged and angular shapes will lock together like puzzle pieces and cannot flow without significant outside force.

Granular materials can be described as singular objects that will deform based on their critical state plasticity—an idealized model for how groups of grains will force their way past one another as stress is applied to them. That plasticity is governed by air pressure and the force of gravity. As such, it is difficult to simulate in a laboratory the critical state plasticity of a granular material on Mars, which has one-third the gravity and 0.6 percent of the air pressure of Earth at sea level.

"We kept trying to extrapolate how critical state plasticity would translate to Mars," Andrade says. "Without knowing that, we could not effectively model how much resistance InSight's mole would face when attempting to drill through Mars's soil, and whether it could reach the desired depth. So, this sparked a clear need for more understanding."

To help investigate the mole's penetration in a granular material, Andrade and the InSight team hired postdoctoral researcher Ivan Vlahinic, who had recently completed a PhD at Northwestern University. Vlahinic set up tests in which early mock-ups of the mole were monitored and mathematically analyzed as they worked their way through a glass column filled with sand.

Andrade, Vlahinic, and their colleagues found that Mars's lower overburden pressure, compared to Earth, will actually make it harder for the mole to penetrate Mars's soil. Overburden pressure is the pressure on a layer of rock or sand exerted by the material stacked above it. At any given depth, the overburden pressure on Mars is one-third of Earth's, corresponding with the Red Planet's lower gravity. For the same packing fraction—the amount of space filled by material—the low pressure allows granular materials to exist in a looser state that actually increases the number of individual contacts that each grain has with its neighbors, and this increases the overall resistance of the material to penetration.

Vlahinic's research was eventually taken over by Jason Marshall, who earned a PhD from Carnegie Mellon University in 2014 and worked as a postdoctoral researcher at Caltech from 2015 to 2018.

"We not only studied penetration, but also how heat moves through the soil," Marshall says. "One of the things that InSight seeks to understand is how the temperature of the planet changes with depth. What we found is that as we're deforming the sand, the particles are obviously being rearranged, and that's going to affect the thermal conductivity measurements." As granular materials deform, the amount of space between the individual grains changes, adjusting the amount of space through which heat will either radiate or conduct via the planet's thin atmosphere. It also increases the number of grain-to-grain contacts as the soil is packed more tightly.

With this knowledge, Andrade was able to develop new computer models that helped the JPL team predict the mole's effectiveness in Martian soil. Unless the mole encounters an obstacle, he is confident that it will be successful.

"The tests show that this thing can go much deeper than two meters. A dealbreaker could be a large formation of rock that blocks the path of the mole, but the InSight landing site selection team have chosen a location on Mars that is as rock-free as possible," he says. In addition, armed with Marshall's information on the effect of particle rearrangement on thermal conductivity, InSight should be in a good position to not only reach its desired depth, but also send back accurate information on the temperature at that depth, Andrade says.

For now, Andrade and his former postdocs can only watch—and wait. "We've done everything we could here on Earth. Now it's up to InSight," he says.