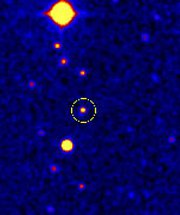 CHICAGO—A large new digital sky survey has been used by astronomers at the California Institute of Technology to discover distant quasars and other rare types of cosmic objects, including mysterious new objects of an unknown nature.

These results are being reported today at the meeting of the American Astronomical Society in Chicago.

The Caltech team, led by S. George Djorgovski, professor of astronomy, made the discoveries in an initial scientific exploration of the Digital Palomar Observatory Sky Survey (DPOSS). The survey, now nearing completion, covers the entire northern sky in three colors, and it is based on a photographic sky atlas (POSS-II) produced at Palomar Observatory.

The final product of the survey is the Palomar-Norris Sky Catalog, which will contain information on over 50 million galaxies and about two billion stars. It will be made available to the general astronomical community, beginning a few months from now.

Comparable amounts of data are now being produced by several other digital sky surveys, including the Two-Micron All-Sky Survey (2MASS) in the infrared wavelengths, the forthcoming Sloan Digital Sky Survey (SDSS), which, like DPOSS, will cover the visible light part of the spectrum, and several NASA missions.

Other projects of a similar scope are now under way or are being planned.

"This is the dawn of the new era of information-rich astronomy," says Djorgovski. "This unprecedented amount of astronomical information will enable scientists and students everywhere, without access to large telescopes, to do first-rate observational astronomy."

Surveys like DPOSS can be used to study the universe in a systematic manner—for example, to probe the large-scale structure in the distribution of galaxies in some detail. But they can also be used to discover rare, or even previously unknown types of astronomical objects: the sheer numbers of detected sources make it possible to find objects that are one in a million or even one in a billion—an astronomer's needle in a digital haystack.

Caltech astronomers did exactly that in their initial scientific verification tests of the DPOSS data. The group used novel techniques to search the data for star-like objects with colors unlike those of the ordinary stars.

Some of these are types of objects they expected to find: for example, very distant quasars, seen at the time when the universe was less than 10 percent of its present age. Such quasars are valuable probes of the early universe and galaxy formation. The Caltech team has so far identified over 70 of them, more than the number found by all other groups in the world combined.

Perhaps even more interesting are surprises, unexpected findings of anomalous objects. The Caltech team has one such object whose nature is still unknown.

"It has a spectrum unlike anything else I have ever seen," says Djorgovski. "We have combed the literature and asked all kinds of experts, but no one can tell us what it is. It is the first one of something new—and a complete mystery to us."

Another discovery is objects that can vary in brightness by a large factor. Since the photographs used in DPOSS are taken at different times with different filters, objects that are much brighter at one time would stand out as having peculiar colors. One such discovery is a starlike object which is associated with an extremely faint galaxy.

Astronomers at Caltech and elsewhere are discussing the concept of the future National (or Global) Virtual Observatory, to be built in cyberspace rather than on some mountaintop. This would be a way to organize and combine many of the large new and forthcoming sky surveys and other astronomical data, to make them accessible over the Web, and to provide novel data-mining tools for their scientific exploration.

Astronomers and computer scientists are now starting collaborations to make this vision a reality. This would be a new way of doing astronomy, with a computer and a rich data archive, rather than with a telescope.

"We are really only beginning to explore the universe in some detail. There must be many wonderful new and unexpected things out there, waiting to be discovered, and large sky surveys are the best way to find them," concludes Djorgovski.

In addition to Djorgovski, the Caltech team includes postdoctoral scholars Stephen Odewahn and Robert Brunner, graduate student Roy Gal, and several Caltech undergraduates. Professor of Physics Tom Prince is also one of the leaders of the effort to create the Virtual Observatory. The work on the DPOSS survey is supported by a grant from the Norris Foundation and by other private donors.