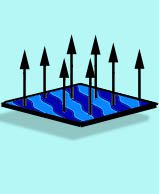 PASADENA—Caltech physicists have succeeded in forcing electrons to flow in an unusual way never previously observed in nature or in the lab.

According to James Eisenstein, professor of physics, he and his collaborators have observed electrons that, when confined to a two-dimensional plane and subjected to an intense magnetic field, can apparently tell the difference between "north-south" and "east-west" directions in their otherwise featureless environment. As such, the electrons are in a state very different from that of conventional isotropic solids, liquids, and gases.

"Electrons do bizarre and wonderful things in a magnetic field," says Eisenstein, explaining that electrons are elementary particles that naturally repel each other unless forced together.

By trapping billions of electrons on a flat surface within a semiconductor crystal wafer—and thus limiting them to two dimensions—Eisenstein's team is able to study what the electrons do at temperatures close to absolute zero and in the presence of large perpendicular magnetic fields.

Research on exotic states of electrons is relatively new, but its theoretical history goes back to the 1930s, when Eugene Wigner speculated that electrons in certain circumstances could actually form a sort of crystallized solid. It turns out that forcing electrons to lie in a two-dimensional plane increases the chances for such exotic configurations.

"They cannot get out of one another's way into the third dimension, and this actually increases the likelihood of unusual 'correlated' phases," Eisenstein says. Adding a magnetic field has a similar effect by forcing the electrons to move in tiny circular orbits rather than running unimpeded across the plane.

One of the best examples of the strange behavior of two-dimensional electron systems is the fractional quantum Hall effect, for which three American scientists won the Nobel Prize in physics last year. Electrons in such a system are essentially a liquid, and since the quantum effects of the subatomic world become a factor at such scales, the entire group takes on some unusual electrical properties.

Eisenstein's new findings are very different than the fractional quantum Hall effect. Most importantly, his group has found that a current sent one way through the flat plane of electrons tends to encounter much greater resistance than an equal current sent at a perpendicular angle. Normally, one would expect all the electrons to more or less disperse evenly across the flat plane, which would mean the same resistance for a current flowing at varying angles.

Dramatically, this "anisotropy" only sets in when the temperature of the electrons is reduced to within one-tenth of one degree above absolute zero, the lowest temperature a system can attain.

Owing to the laws of quantum mechanics, the circular orbits of the electrons exist only at discrete energies, called Landau levels. For the fractional quantum Hall effect, all of the electrons are in the lowest such level. Eisenstein's new results appear when the higher energy levels are also populated with electrons. While it appears that a minimum of three levels must be occupied, Eisenstein has seen the effects in many higher Landau levels.

"This generic aspect makes the new findings all the more important," comments Eisenstein.

"There's not a good theoretical understanding of what's going on," Eisenstein says. "Some think such a 'charge-density wave' is at the heart; others think a more appropriate analogy might be the liquid crystal displays in a digital watch."

Another interesting question that could have deep underpinnings is how and why the system "chooses" its particular alignments. The alignment could have to do with the crystal substrate in the wafer, but Eisenstein says this is not clear.

Eisenstein and his collaborators are proceeding with their work, and have recently published results in the January 11 issue of the journal Physical Review Letters.