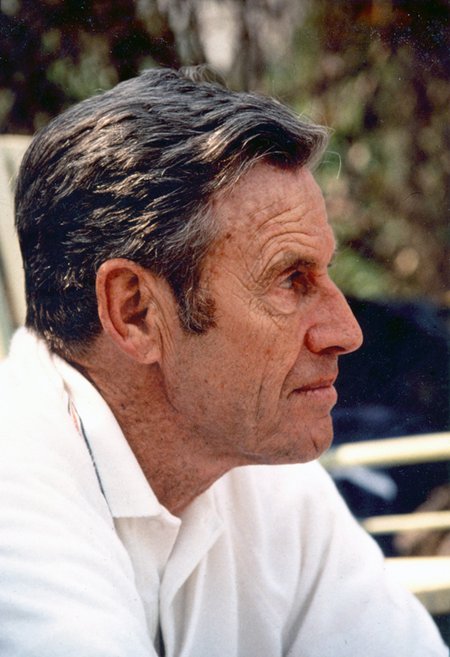 Robert F. Christy, one of the last people alive to have worked on the Manhattan Project—which created the atomic bomb during World War II—and whose later research in astrophysics contributed to our understanding of the size of the universe, passed away on October 3 at his home in Pasadena. The former provost and acting president of the California Institute of Technology (Caltech), where he was a longtime professor, was 96 years old.

Christy was credited with designing the explosive core of the first atomic bomb.

"Robert Christy was one of the founders of a very important area of astrophysical research and a major figure at Caltech in the postwar era," says B. Thomas Soifer, professor of physics and chair of the Division of Physics, Mathematics and Astronomy (PMA) at Caltech. "Bob was an outstanding theoretical physicist; his contributions to scientific research, to public policy—and his leadership—helped in shaping what Caltech is today."

Christy was born in Vancouver, British Columbia, and entered the University of British Columbia (UBC) in 1932 as a 16-year-old sophomore. He graduated in 1935 at the age of 19 with a bachelor's degree in physics, then stayed for two more years at UBC to earn a master's degree in physics and mathematics in 1937, after which he moved to the UC Berkeley, where he studied physics as a graduate student of J. Robert Oppenheimer, also known as the "father of the atomic bomb."

After earning his degree in 1941, Christy was hired to teach at the Illinois Institute of Technology. In the fall of 1941 he was invited to join the Manhattan Project; he started in January of 1942, working with Eugene Wigner at the University of Chicago on the theory of atomic chain reactions. When Enrico Fermi and his team moved to the University of Chicago in March, he asked Christy to work with him on experimental "exponential piles" (chain-reacting systems that were too small to fully chain-react). In the winter of 1942, Christy helped build the first nuclear reactor, Chicago Pile-1, before being invited to Los Alamos by Oppenheimer in early 1943. He also helped design the reactors at Hanford where the plutonium was to be made.

Notably, Christy was involved in the creation of the plutonium core ("pit") of the implosion weapon designed at Los Alamos. The Los Alamos team's idea for the plutonium bomb was to embed a mass of nuclear fuel (specifically, plutonium) within a hollow sphere of high-explosive lenses; when the explosives were detonated, the nuclear fuel would implode into a dense "critical" mass, triggering a chain reaction that would lead to a nuclear explosion. However, the team soon realized, if the shape of the core became unstable and deviated from a perfect sphere, the bomb might fizzle out and fail to explode.

Christy's design of the Pu core consisted of a nearly solid sphere of plutonium metal of slightly less than critical mass, with a small central cavity containing an "initiator" that supplied neutrons to get the fission reaction started as the core imploded. When compressed hard enough, the atoms would be forced close enough together to achieve critical mass, through a process known as fast criticality, triggering the chain reaction and a nuclear blast. This is the design (referred to as the "Christy Gadget" at Los Alamos at the time; the word "bomb" wasn't used by Manhattan Project scientists) that was used in the Trinity bomb test and in the weapon ("Fat Man") dropped on Nagasaki on August 9, 1945.

"When I first arrived at Caltech in September 1949," recalls Ward Whaling, Caltech professor of physics, emeritus, and Christy's colleague for more than six decades, "fall classes had not started and the PMA division office could find no one to show me around the Kellogg Radiation Laboratory except a young theoretical physicist named Christy. I had never heard of him—his Los Alamos achievements would remain classified for years—but the prospect of being shown the lab by a theoretical physicist was depressing. Boy, was I wrong! I quickly learned that Bob Christy was quite familiar with that part of the new lab that had already been installed—to replace the wartime weapons-testing facility and an earlier X-ray therapy clinic—and he also knew what was being planned for the future. Later, when I began my own research using the accelerators he had shown me that first day, I learned that he regularly visited the lab, maybe two or the times a week, in the afternoon, with his hands clasped behind his back, just looking, sometimes asking a question, but taking care not to interrupt serious work." As Christy noted in a 1994 oral history interview with the Caltech Archives, "I was an unusual theorist in that my greatest strength was . . . in seeing how theory and experiment related."

In 1960, Christy turned his attention Cepheid variable stars, which had long been used as a so-called standard candle with which to measure distances to other galaxies because their pulsation rate varies with their intrinsic brightness.

At the time "it was unknown why they varied, what made them vary," explained Christy in his oral history. "It was known that they were apparently spherical pulsators. That is, they expanded and contracted—a regular expansion and contraction in spherical symmetry. I thought: Well, this is very much like the spherical hydrodynamics in implosion," he said. "It's basically the same equations we had used—of course, with different substances—but the mathematical approach was very similar to what we had been working on at Los Alamos." The mathematical model that Christy developed helped explain why the stars vibrated and earned him the Royal Astronomical Society's Eddington Medal in 1967. He was elected to the National Academy of Sciences in 1965.

"Christy's analysis of how Cepheid stars pulsate enabled him to say definitively, when a star pulsates at a certain rate, just how bright it would be if we were close to it," says Kip S. Thorne, Richard P. Feynman Professor of Theoretical Physics, Emeritus, at Caltech. "Astronomers could then compare that with how bright the star looks through their telescopes and deduce how far away the star is—the dimmer it appears, the farther it must be. This was crucial in determining the size of our galaxy and thence, combined with much other data, the size of the universe."

Christy held several administrative posts during his tenure at Caltech, including as executive officer for physics from 1968 to 1970, Caltech's faculty chair from 1969 to 1971, vice president and provost from 1970 to 1980, and, when Institute president Harold Brown left to become secretary of defense under Jimmy Carter, as acting president of the Institute from 1977 to 1978.

Because of his wartime experience, Christy was a longtime opponent of the further development of nuclear weapons. In the summer of 1945, he became one of the founding members of the Association of Los Alamos Scientists (ALAS) and helped draft a statement about educating the public on how to manage atomic energy for peaceful uses. He was one of 10 Caltech physicists who had participated in the bomb-building at Los Alamos who signed and paid for a full-page ad that ran in the Los Angeles Times on October 14, 1956, calling for an end to nuclear weapons tests.

In the mid-1980s, Christy became a member of the National Research Council's Committee on Dosimetry, which studied the radiation effects of the Hiroshima and Nagasaki bombs. "He worked on the bomb in good faith, because he wanted to save lives, and he was proud that the work that he'd done helped the war come to an end," says Christy's widow, I.-Juliana Sackmann Christy. "But he later referred to nuclear weapons as 'killing machines.' He was a man of principle."

A skilled dancer who loved to sing, Christy was an avid horseman and learned to ride from Robert Oppenheimer, who gave him his first "half a horse" to lure him to join the Manhattan Project, says Mrs. Christy. "Another scientist owned the other half, and the two often argued about who had the front and who had the back," she says. Christy continued to ride until he was well into his 90s—and after losing his eyesight—on his 240-acre ranch in Ventura County.