Notes from the Back Row: "Electrons In Flatland" 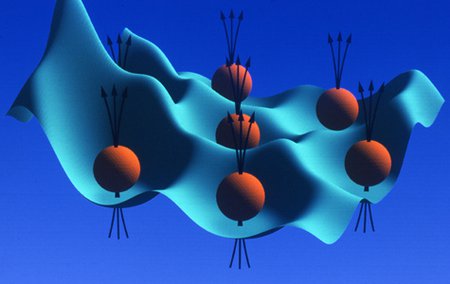 Quantum mechanics prides itself on its weirdness. Waves are particles, particles are waves, and nothing is anything until you measure it, at which point an infinity of possibilities collapses into one more-or-less solid certainty. And what happens when you have weird things acting in large groups? Even weirder things, says Caltech physicist James Eisenstein. Eisenstein should know; the Frank J. Roshek Professor of Physics and Applied Physics studies the quantum-mechanical equivalent of flash mobs—or, as they're known to physicists, "emergent systems." These are not wild gleams in a theoretician's eye, either—the "Flatland" in the title refers to the two-dimensional logic gates found by the billion in every smartphone, iPod, or other high-tech gadget. In his Watson lecture on January 18, 2012, he uses vivid analogies and nifty animations to lead us through the basics of quantum electronics to his own work with some very bizarre particles—even for quantum mechanics. Could these particles form the basis of a computer that uses the laws of quantum mechanics to solve otherwise unsolvable problems? Watch the lecture and find out!

"Electrons in Flatland" is available for download in HD from Caltech on iTunes U. (Episode 7)