Oceans of Water in a Planet-Forming Disk 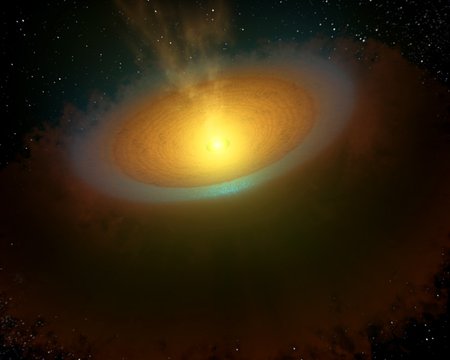 This artist's concept illustrates an icy planet-forming disk around a young star called TW Hydrae, located about 175 light-years away. Astronomers using the Herschel Space Observatory detected copious amounts of cool water vapor, illustrated in blue, emanating from the star's planet-forming disk of dust and gas. The water vapor, which probably comes from icy grains in the disk, is located in the frigid outer regions of the star system, where comets will take shape. Credit: NASA/JPL-Caltech
Tags:
astronomy & physics, earth & planetary science

Astronomers have detected massive quantities of water in a planet-forming gas disk around a young star. The water—which is frozen in the icy outer regions of the disk—could fill Earth's oceans several thousand times over. The discovery, published in the October 21 issue of the journal Science, could help explain how Earth got its oceans and suggests that our planet may not be the only watery world in the cosmos.

"This new result shows that the reservoir of water ice in such a disk is huge," says Darek Lis, a senior research associate in physics at Caltech and a coauthor on the paper. If other planet-forming disks also have such copious amounts of water, then there's a greater chance that other planets are also wet. "Water-covered planets like Earth may be quite common," he says.

To make the discovery, the team of researchers, which includes Caltech professor of planetary science Geoff Blake and JPL's John Pearson, pointed the Herschel Space Observatory at a star called TW Hydrae, located 175 light years away. TW Hydrae, which is only about 10 million years old, is surrounded by a disk of gas—just as the young sun was about 4.6 billion years ago.

The team found the water vapor—which previously had never been detected in the outer regions of such a disk—using Herschel's Heterodyne Instrument for the Far Infrared (HIFI). The vapor, the researchers say, likely is produced when ultraviolet light from the central and other nearby stars bombards large reservoirs of ice in the disk.

Lis, Blake, and colleagues estimate that the disk holds several thousand oceans' worth of water ice. The fact that there's so much water in this embryonic planetary system means that the outer part of the solar nebula—the gas disk that formed our solar system—could have been chock-full of ice as well. Such a large source of water was crucial for the creation of Earth's seas. According to the current theory of solar-system formation, water was scarce in the inner part of solar nebula, where Earth formed about 4.5 billion years ago. "Water is essential to life as we know it," Blake says. "But the early Earth is predicted to have been hot and dry." Earth's water, then, must have come from somewhere else. One likely source? Comets.

Comets, often called dirty snowballs, are chunks of ice and rock that orbit the sun in long, swooping trajectories. Because they spend most of their time in the frigid outer-edges of the solar system, comets can contain prodigious quantities of water ice, and collisions of a few million comets with Earth could have brought enough water to create the oceans. A few million comets may sound like a lot, but there was a tremendous amount of debris flying around back then, and with possibly as many as trillions of icy objects in the outer solar system, the researchers explain, only a tiny fraction would have needed to hit Earth.

If this story is true, ample water should exist in the outer disk where comets form—which is exactly what the astronomers just discovered in TW Hydrae. "These results beautifully confirm the notion that the critical reservoir of ice in forming planetary systems lies well outside the formation zone of Earthlike planets," Blake says.

The TW Hydrae measurements come on the heels of the discovery that the chemical signature of water ice in comet Hartley 2 is similar to the signature of Earth's oceans, published online on October 5 in the journal Nature. In the Nature paper, Lis and Blake, along with Caltech postdoctoral scholar Martin Emprechtinger, measured the ratio of deuterium (an isotope of hydrogen with an extra neutron in its nucleus) to regular hydrogen in water ice evaporated from Hartley 2. The ratio was very similar to the ratios in Earth's ocean water, supporting the idea that the seas did come from the skies.

Previous measurements of the composition of ice in other comets revealed chemical signatures different from those of our oceans, suggesting that Earth got most of its water from asteroids. These other comets, however, were from the Oort cloud, a distant collection of up to trillions of icy bodies enveloping the entire solar system. Hartley 2 comes from the Kuiper Belt, a belt of objects at the edge of the solar system. Therefore, Lis says, "icy bodies in the outer solar system—the Kuiper Belt—could have been the source of Earth's water. These findings are yet another important step in our quest to understand the origin of life on Earth and assess possibilities of life in other planetary systems."