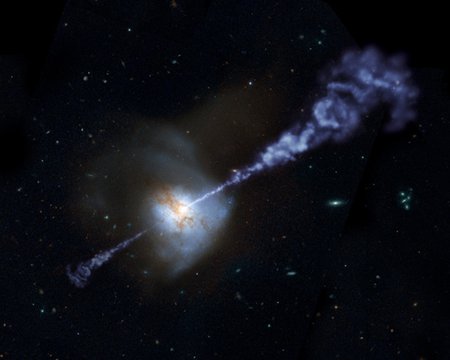 This artistically modified image of the local galaxy Arp 220, captured by the Hubble Space Telescope, helps illustrate the Herschel results. The bright core of the galaxy, paired with an overlaid artist's impression of emanating jets, indicate that the central black hole's activity is intensifying. As the active black hole continues to rev up, the rate of star formation will, in turn, be suppressed in the galaxy. Credit: NASA/JPL-Caltech
Tags:
astronomy & physics

A team of astronomers has found that the most active galactic nuclei—enormous black holes that are violently devouring gas and dust at the centers of galaxies—may prevent new stars from forming. The team, which includes several researchers from Caltech, reported its findings in the May 10 issue of the journal Nature.

Supermassive black holes—which are more than a million times as massive as the sun—are found at the cores of nearly all large galaxies. As gas and dust fall into the behemoth, the material heats up and produces tremendous amounts of energy, radiating X rays. Previous observations have suggested that black holes with higher activity—and therefore brighter X-ray radiation—trigger more stars to form in their galaxies.

But using the Herschel Space Observatory, the astronomers have now discovered that if the black hole is too active, it appears to shut down star formation. What may be happening, the astronomers say, is that, at first, the infalling gas and dust can clump together and make new stars. But if you feed the black hole too much, the material gets so hot that the resulting radiation blasts the surrounding gas away. Without enough raw materials, new stars can no longer form.

While astronomers previously have seen black holes suppress star formation in a few individual galaxies, these new results are based on observations of 65 galaxies, says Joaquin Vieira, a postdoctoral scholar in physics at Caltech and coauthor of the paper. Instead of just studying a specific case, the researchers looked at the aggregate properties of a large sample. "This is an important and unexpected result that could have only been shown with a large and cohesive survey," adds James Bock, a senior faculty associate at Caltech and cocoordinator of the Herschel survey.